Ever since I met Dr. Glen Slater in 2008, I have known him to be a particularly passionate and knowledgeable advocate of film. I often see his film reviews in Jungian and depth publications, and his background in clinical psychology and religious studies—along with his interest in technology and culture—make his commentary especially valuable.

In a recent interview, Glen and I sat down together for an intriguing depth discussion on Jung, individuation, and film.

To begin, Dr. Slater notes, while we can think of individuation as coming to one’s deep self or unique character, it’s also the place where one comes to contribute to the larger human story. The individuation process is both deeply personal but also transpersonal; both universal and archetypal. At any given time in a specific culture, individuation is about finding a deep relationship with those energies that are coming up from the collective psyche. Jung believed that “no one can individuate on a mountaintop,” Glen reminded me. Therefore, at the same time you are growing into your own genius, you are also finding where your own life resonates with what is emerging collectively.

Since we need models and mirrors, films are a key place we go today for myth. Films provide a wonderful arena where we can see characters going through the process of individuation—not only experiencing change and transformation, but also finding a deeper understanding of who they really are. As Joseph Campbell pointed out in The Hero’s Journey, there is often initially a refusal of the call, but eventually archetypal forces align to draw the character in to their deeper destiny, Glen states. While a character may initially be uncertain in the journey to individuation, more often that not, they reach a point where an event occurs that seems to spark the idea that they need to serve.

In our culture, we live in a dualistic state in which we all deeply long for a vision that is unitive; where what happens outside is connected to what’s going on inside our mind, Slater notes. Therefore, film, by nature, is an excellent tool for melding inner and outer, enabling us to recover that sense of presence, unity, enchantment, or magic.

So how does one begin to look at a film from a Jungian lens? The answer is definitely related to this idea that the outer world is reflective of the inner world, Slater insists. You must make the bridge with what is known in Jungian psychology as “symbolic thought,” the idea that what occurs in the story is metaphorical rather than literal. The process of individuation may be regarded as “living the symbolic life,” suggesting we must move from an egocentric place of being, to looking at events with a kind of curiosity that asks what things mean on a deeper level.

It’s not hard to know when a film is resonating with something going on in our inner worlds.  When we walk out of a film, it either stays with us or it doesn’t. It’s a litmus test, Glen claims. Does it stay with you or linger in the way a powerful dream might? Paying attention to the way certain stories or characters stay with us helps us discern the material that is touching the psyche.

So what are the new values and energies that need to come in to drive the process? For one, films can empower us to see what’s on the horizon for our culture. As an example, Glen emphasizes that at a time when many Jungian and depth thinkers are talking about the return of the feminine in our current masculinized culture, certain female “heroes” (like Furiosa, played by Charlize Theron in the recent Mad Max: Fury Road) carry a very different value system than we have customarily seen before. 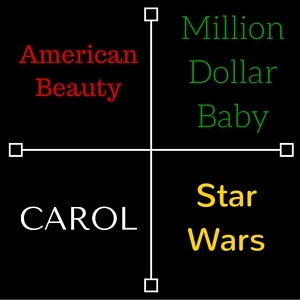 One especially important point Slater notes is that often a protagonist does not move up and out into the light, but rather down into the underworld. Intelligent filmmakers are able to show us the shadow side of our culture instead of parading the heroic values that are traditionally held up in a culture. In our discussion, Glen cites examples from films like American Beauty, Million Dollar Baby, Carol, and Star Wars for various interpretations from Jungian perspectives. Jung’s work provides a great toolbox in terms of articulating the archetypes, he asserts.

When I asked Glen how the word “soul”—so commonly used in Jungian and depth psychologies—applies to film, he had a fascinating perspective. He suggests soul refers to a sense there is something outside the ego, that is directing or shaping our experience so that we are drawn into a feeling that there are other presences at work. He points to Jungian and archetypal psychologist, James Hillman, as someone who thought of soul as “that dimension of experience where the spiritual comes into the world”—into everyday embodied experience. For Hillman, the sense of soul requires something that is substantive, something “felt.” In this way, soul is related to the magic and enchantment.

Slater contends that we can identify the presence of an archetype when the “universal” and the “unique” are together simultaneously. Film must absolutely engage our imaginations. And, while images do engage us, for our imaginations to really be set on fire, archetypal patterns have to be activated, creating resonance, and lingering on well after the lights come up and the theater empties. What’s the last film you saw that really set your imagination alight? If you have to think about it, it may be time to see another film.

Glen Slater, Ph.D., has a background in both religious studies and clinical psychology. He teaches Jungian and archetypal psychology at Pacifica Graduate Institute, Santa Barbara, California. He edited and introduced the third volume of James Hillman’s Uniform Edition, Senex and Puer, as well as a volume of essays by Pacifica faculty, Varieties of Mythic Experience, and has contributed a number of articles to Spring journal and other Jungian publications—several in the area of Jung and film.