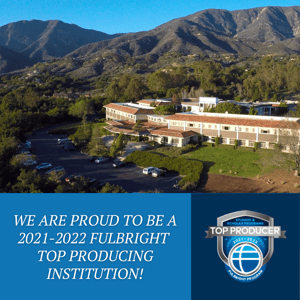 Pacifica is honored to be included on the 2021-2022 Fulbright Program “Top Producing Institutions” of Fulbright U.S. Students, as announced in The Chronicle of Higher Education on February 27, 2022. Secretary of State Antony J. Blinken congratulated Pacifica, saying, “This achievement is a testament to your institution’s deep commitment to international exchange and to building lasting connections between the people of the United States and the people of other countries.”

So what are the Fulbright Awards and why are they significant? Our Provost and Vice President of Academic Affairs, Peter M. Rojcewicz, explains, “The Fulbright Student Program is a network of some 140 nations dedicated to trans-national exchange that seeks advancement of cultural competency through academic and professional pursuit of graduate degrees, fieldwork, research, and teaching abroad. Fulbright students live with and learn from different peoples of the world, sharing daily tasks through direct interactions in classrooms, community sites, and homes of their hosts. They slowly grasp the standards various peoples use to perceive, predict, judge, and act upon their values. Learning through cultural dialog often triggers shifts in students’ world views from egocentric and ethnocentric to world-centric perspectives of planetary people.” It is also worth noting that many alumni of the program have gone on to become winners of the Nobel Prize and Pulitzer Prize, as well as serving as heads of state.

Dr. Mary Watkins, former Co-Chair of our CLIE program, has been instrumental in launching the Fulbright program at Pacifica. She was approached in 2015 by a student who wanted to apply, and as she says, “I thought it would be a wonderful opportunity for Pacifica students. After researching the program, I was able to attend several orientations in Washington, D.C. and was able to get it off the ground at Pacifica in 2016.” Dr. Nuria Ciofalo, also on our CLIE faculty, has continued these efforts and was thanked by Secretary of State Blinken for her efforts in supporting the Fulbright U.S. Student Program at Pacifica.

Pacifica’s Madalina Bortes, in the Ph.D. in Depth Psychology program, was a semi-finalist for the Fulbright in 2021 for her research on “The Psychosomatic Experience of Communism in România.” And Heesun Kim, a bright presence in our Ph.D. program for Integrative Therapy and Healing Practices, recently won acceptance into the Fulbright program for her project, “Jeju Shamanism: Healing Intergenerational Trauma through Collective Mourning.” As Heesun describes her project, “The research will be an ethnographic study and I plan to stay in Jeju Island for one year and do fieldwork, filming shamanic rituals, and conducting interviews with shamans, massacre survivors, and victims' families. One of the proposals in the Fulbright grant is creating a Grieving Tree event with the local shamans, community members, and non-profit organizations. I am also thinking about making an animation production related to the Jeju 4.3 massacre based on interviews and active imagination, hopefully collaborating with the local Jeju artists.”

Pacifica intends to continue nurturing the Fulbright program at Pacifica, because, as Provost Peter M. Rojcewicz, notes, “Fulbright programs align with Pacifica’s recognition of the imagination at the center of all learning and together may lead to a new and sustained enchantment of the world.” In particular, he says, “A special Fulbright initiative with resonance with Pacifica’s timely mission of tending to soul in and of the world is The Fulbright-National Geographic Storytelling Fellowship. It provides students opportunities to participate in an academic year of digital storytelling on globally significant themes. Students who pursue graduate degrees at Pacifica or Pacifica students who study abroad can share original stories of human possibility and repair of the ongoing splitting of human and planetary integrity.”