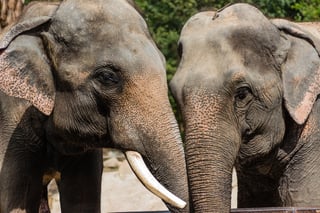 For Jonathan, one premise for the correlation between the work he was doing in the PhD specialization in Somatics at Pacifica and the work he proposed to do with elephants was to look at human-elephant relationships and human-elephant communications.

We know elephants don’t have abstract language the same way that we do, Jonathan asserts, so their ways of thinking, being, and communicating are obviously different than ours. What we do share, however, is that we are both embodied species: that is, we live out our lives as bodies, and we make contact and connections through our bodies. The question of what it means to be an embodied elephant appeared to be an interesting point of intersection between the two species, humans and elephants, Jonathan decided. It opens up avenues for approaching elephants through gesture, touch, and empathy—all embodied responses we relate to as humans by way of “gut feelings,” emotional resonance, or a sense of attunement. Jonathan was curious to see how those same ideas might be applied to another intelligent species.

Our conversation quickly turned to an intriguing video making the rounds on social media recently, one featuring an elephant holding a paintbrush and painting a picture of an elephant on a canvas. Given a paintbrush in ordinary circumstances, elephants wouldn’t naturally likely make those same sorts of shapes, Jonathan observes—although he does recall attending an exhibit at a museum in Berkeley years ago that featured paintings made by elephants that, though abstract, were really fascinating. Most likely, the elephant in that video is highly trained and responding to cues to draw the shapes it did.

When I experienced disappointment (and some dismay at the ethical implications) at Jonathan’s suggestion that the elephant was trained to depict a seemingly consciously-created, heartfelt image of a fellow member of its species, I realized how much I—and maybe many of us—experience some inherent longing to enter into some kind of a common field with other animals on the planet, and to believe that they are experiencing and sensing the world as emotional beings in a similar way to us. 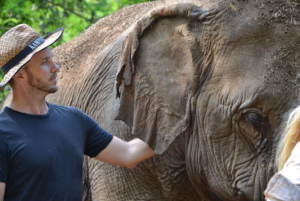 One of the benefits of doing fieldwork in Cambodia, Jonathan found, is that he was able to have direct contact with the elephants as laws are less limiting there. When you engage, you have to approach each elephant as an individual, he quickly realized, as each has its own history and temperament, and he felt the most connection with those elephants he was able to encounter directly through touch. “Being able to make tactile contact was a really beautiful way to connect and to engage with a palpable sense of their intelligence,” he observed.

Elephants also have a capacity for infrasonic vibration, which is primarily outside the auditory range for humans to hear. However, there is a range that is deep and low that we can pick up. Jonathan remarks that he could be all the way across a field from the elephants and still feel his chest cavity vibrate when they would rumble at that frequency. He also had the experience of this at close range, when he would touch the forehead of a particular elephant and she would rumble at him. That sense of her “rattling his bones” left him with a profound impression that they were sharing a common space beyond language.

Elephants also use gesture to communicate, such as moving their trunk in a certain way or flaring their ears, and one researcher has documented over 200 different sounds they make. They can be “chatty” with one another, Jonathan relates, especially at the beginning of the day when they first get together, and while it is somewhat speculative, there is some evidence that, through infrasonic communication, they can apparently communicate over long distances, seeming to grasp information “out of the ether,” even potentially passing information about what’s happening to a different herd far away. Elephants are also very tactile in corresponding with each other, and, though foreign to us, one additional channel is chemical communication. Elephants frequently put their trunks in one another’s mouths, leading some to believe they are passing information through a chemical response. In that sense they are “quite alien beings,” Jonathan suggests.

For his research, Jonathan utilized trans-species ethnography, an approach to interspecies communities where multiple species co-habitate. Anthropologists have learned that if you want to understand another culture, you have to participate in that culture; there has to be a relationship with what you are studying, Jonathan relates. Ethnography involves the idea of the participant-observer, where one goes into a culture to observe with a certain amount of objectivity, which is balanced with relationship through participation. In the early days of anthropology, when all studies were deemed to be “objective,” there was some criticism that those studies were akin to imperialism or colonialism (where some aspect of the observer was imposed the observed) because researchers weren’t typically communicating with those they were studying, but rather imposing their views or ideals while telling themselves they were being objective about the research.

So trans-species ethnography is a way to approach intelligent animals in communities that involve multiple species from the perspective of being a participant-observer rather than “just” an observer, Jonathan notes. That opens up the possibility of relationship and the affirmation of relationship as a source of valuable information. In current day, this is something we expect when research is conducted with human cultures other than our own, but still does not necessarily apply to animal cultures. Jonathan uses the word “culture” very deliberately here, he tells me, because when referring to intelligent social groups like elephants, dolphins, or chimpanzees, we need to see what they can teach us from that perspective.

I ask about elephant emotions, because elephants are well documented in behaviors where they seem to be mourning or grieving. When wild elephants in Africa come across the bones of a dead elephant, they appear to approach them in a very reflective manner. While we can’t really know what they’re thinking, Jonathan points out, the elephants will pause and gently stroke the bones in an act of sensitivity, seemingly accompanied by awareness and a sense of solemnity and importance. This behavior is unparalleled in the animal world, he believes, and as such, makes a strong case for regarding them as a non-human culture, and not as just another species.

Elephants are also known to adopt orphans – if a baby is separated from its mother or its herd, another elephant may take that baby on as her own which seems contrary to the evolutionary idea of “survival of the fittest". They are creatures of community and relationship, he affirms. They care for one another, love and appreciate one another. They are also capable of powerful anger: they have been known to become outraged when they’ve been wronged, hurt, or have seen their loved ones hurt.” In these ways, they appear to transcend what we usually think of as “animals.”

Perhaps the biggest challenge Jonathan encountered in his research originated from other humans. Many visitors to the sanctuary in Cambodia seemed almost unable to hear what he had to say, he noted, perhaps experiencing deeply entrenched cultural attitudes somehow threatened by the idea that elephants are conscious, sensitive, emotional beings, rather than “just” animals. In an ethnographic research study where he was not only trying to understand the elephants but also the humans in the equation, it was sometimes hard to make space for that point of view, Jonathan revealed.

For Jonathan, his work with elephants still feels like its unfinished business. Even as a child he had fantasies about making documentaries that would portray animals from a more cultural perspective, rather than a strictly scientific one. His fieldwork at the Elephant Valley Project provided a wonderful opportunity to step into those aspirations in an actualized and professional way. He hopes to one day write a book about it and to find ways to continue to go back and work with the elephants, and maybe with dolphins as well, as he continues to believe in the powerful importance of the work.

This work is about the “other,” he agrees, and humans “have so far to go just in being able to recognize the other in our fellow humans and deal with that.” Once we start getting a handle on that, we are going to start turning toward our relationships with other species and we’ll have to reconcile those, he insists—a process that may involve a lot of mourning on part, but also opportunity for tremendous growth and joy.

Learn more about the Somatic Studies Specialization at Pacifica

[1] Learn more about the Elephant Valley Project at www.elephantvalleyproject.org

[2] Also written as “transspecies” and “transpecies”, or referred to as “multi-species” ethnography

Jonathan Erickson is a writer and life coach based in the Portland, OR, area. He holds a master’s degree in somatic depth psychology from Pacifica Graduate Institute, where he is now writing a doctoral dissertation on the neuroscience of imagination. Jonathan is a lifelong animal lover who completed his Ph.D. fieldwork at Pacifica Graduate Institute by researching human-elephant relationships in Cambodia. 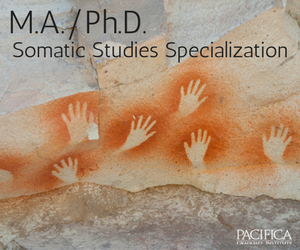