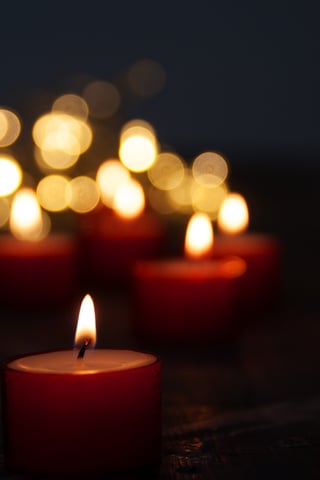 Cumulative trauma, be it individual or collective, shatters essential links and destroys connective tissue. It leaves us isolated, disconnected, and overwhelmed – or outraged with nowhere to go. As we reconnect, we are resisting the pull toward powerless rage and helplessness. Communities of belonging, inclusion, and mutuality are safe zones where we are supported and able to be of support. Where we can repair the fracturing, regenerate compromised capacities for thinking, feeling, and being, and restore a sense of meaning as we work together for change. After the recent elections, while many of us were unable to process or understand, we joined in marches and discussions to help each other stand the trauma. To stay awake and stave off the dissociative fog that ensues; to stand up and to stand together for change. 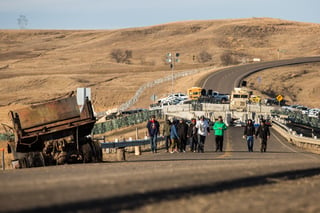 When I returned from an action at the Oceti Sakowin camp in Cannonball, ND, in November, 2016, it hit me: War is boring. Resisting and standing together with sisters and brothers is joyful, fresh, and life-giving. I wasn’t being Pollyanna-ish. Ten years of being with many returning veterans and their families had brought home the costs of war. But working for the good was exhilarating. It reminded me of what a veteran said at the end of one of our Coming Home retreats: “I don’t often go to church, but this is what church should feel like.”

On the weekend of March 24th is the workshop Waking Up From Trauma: Cultivating Communities of Resistance in a Time of Uncertainty. In this workshop we explore how communities of resistance are also optimal environments for learning and healing. Join us as we experience a sense of beloved community through stimulating presentations, small group discussion, meditation and expressive arts.

Here is a vignette to close: The announcer at the sacred fire at Standing Rock said, “There hasn’t been much going so well the past couple days.” Just days before, over 100 water protectors had been arrested and many brutalized. There was a long lull; a down feeling seemed to return.

Just then a buzz went up, slowly building to a roar, then a cheer. I looked to my right and along the road that bordered the sacred fire a caravan was rolling up, as if responding to unspoken prayers. On horseback and in pick-up trucks came young male warriors, many wearing feathers. They looked like they had been through an ordeal and carried prayer flags on long poles and a drum. 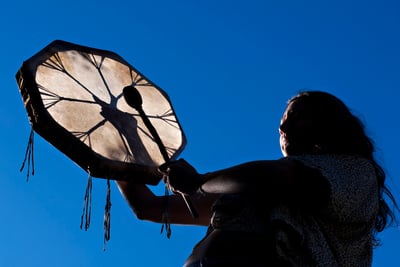 A few Natives formed a circle at the sacred fire and began drumming and singing. The energy of ceremony rose in a sharp dramatic way. From the far corners of camp residents began to arrive, drawn by the music, which was surely prayer. Young male warriors began to dance, circling the drummers. Elders would touch and bless them. The rising tide of energy was palpable and irresistible. Eyes brightened, we were immersed, and the sense of emptiness lifted as we were carried into the ancient ritual.

The drumming and singing and praying built to a fever pitch; just when it seemed to be ending, it would begin again. The crowd had grown to hundreds. The community was revitalizing itself using its ceremonial resources. The drumbeats and cries went right through and in— linking, buoying, energizing, awakening. The ancient was alive. Ancestors felt present. I marveled at how the community was spontaneously raising its spirits by raising The Great Spirit (Wakan Taka) through the presence of All My Relations (Mitakuye Oyasin).

Carried along on this great wave, I glanced around and saw that others were, too. The entire community was infused with a pulsating life-giving energy that linked us all. We were breathing and being breathed in a great communal inspiration. When the prayer stopped, there was a long silence. Something had shifted, a “climate change” of benevolent aliveness.

Joseph Bobrow, Roshi, Ph.D., is the author of three books, Waking Up From War: A Better Way Home For Veterans And Nations (foreword by His Holiness the Dalai Lama), Zen And Psychotherapy: Partners in Liberation (comments by Ven. Thich Nhat Hanh), and After Midnight: Poems of Love and Death(Fisher King Press, January, 2017). He also co-translated Thich Nhat Hanh’s Guide To Walking Meditation. Joseph is a Zen master and Roshi of Deep Streams Zen Institute in Santa Barbara, which offers Zen Buddhist practice, interdisciplinary education, and peace-building programs that implement new integrative models of transforming suffering. For ten years, Coming Home Project, a community service of Deep Streams Zen Institute, helped thousands of post-9/11 service members, veterans, families, and caregivers transform the unseen injuries of war. A retired psychoanalyst, Joseph now serves on the faculty of Pacifica Graduate Institute and teaches locally and around the world.