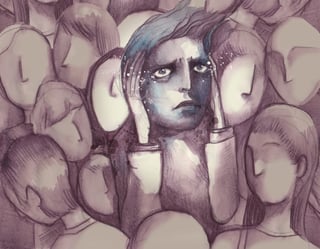 For 20 years, Kalsched has been crafting a model of the dissociating psyche, which describes various unconscious archetypal powers arranged in a dynamic system of defense that attempts to protect a sacred, innocent psyche from further violation. In order to leave this enclave, we need to become emotionally literate, Kalsched suggests, one of the major goals of the work depth psychologists take on. This includes working through grief and despair.

This self-care system and all its constituents is invisible, Kalsched points out. The only way we can engage is by looking for the “tracks” they leave in dreams, in the imagination, or in the practice of active imagination advocated by Jung. The constituents may show up in opposing forms: as a “devil” related to violence, adversary, accuser, critic, or tyrant which can lead to innate distress such as hatred, loathing, or shame; or as a “bright angel,” which suggests essential goodness, safety, bliss, hope, and love. Kalsched offers a word of caution for this latter seemingly positive aspect, though, stating the “bright angel” aspect can seduce a therapy patient into perfectionistic ideals or into spiritual bypass where people seek to escape through bliss or oblivion. The key to healing is to bring the “dark angel” into the process, including allowing and working with rage that comes from archetypal energy. That dark angel energy is abroad in the land in this moment in time, Kalsched maintains.

Once these constituents, whether showing up as adversary, critic, rescuer, or guardian angel, start to become imaginal (that is—we begin to work with them, as through dreamwork), we can start relating to them, and then they can then begin to heal. Certain affects in the body combined with images in the mind lead to meaning. It’s not actually trauma that fractures the psyche, Kalsched insists: these figures do. This scenario is universal—or at least ubiquitous—in highly dissociated individuals. These two angels are different aspects of the same mythic figure, Kalsched believes, and it is a split that has to be healed.

In his talk, Kalsched outlined four succinct narratives often heard among trauma survivors in varying situations where they identify with the bright or dark angel, and then project the opposite onto the world, resulting in identification or projections about innocence, victimhood, expectation of rescue, outrage, woundedness, etc.

If you’re violated, you need healthy aggression to defend the ego, Kalsched asserts, and hate isn’t necessarily unhealthy unless gets out of control and leads to aggression. Healthy hate can be channeled, neutralized, articulated and constrained by civility. Unhealthy hate, on the other hand, usually sweeps us away to our destruction as a defense against underlying grief. In his talk, Kalsched made some fascinating observations about the current political climate in the U.S. and about how some of the key players are channeling their own versions of the archetypal figures he perceives in the self-care system.

Archetypal emotion is stalking the land right now, says Kalsched. It’s critical that we manage to transform feelings of hate into usable anger. By staying conscious of both worlds, we retain our emotional literacy. By feeding them both and keeping them both, the human heart can maintain its health. Holding the tension between opposites, as Jung advocated, is essential to the health of our psyche and of our democracy. Democracy, when its working, gives a chance for love and hate to learn to coexist inside us through our participation in communities and rituals.

When hate breaks the containers, love is the first to leave and the result is despair, and that’s front and center as to where we are as a country, Kalsched suggests. He points to wisdom offered by C. G. Jung, who said that we must continuously develop an “imagination for evil,” so that we can move into a deeper place of understanding. [3]

It is critical that we find the necessary containers in which we can come into better relationship with our emotions and ultimately heal. “Conflict consciously held always takes us deeper. That’s what the soul wants. Ultimately, I think that’s what our democracy wants too,” Kalsched observes.

Listen to a recent interview with Donald Kalsched, “Trauma and the Soul: Psychoanalytic Approaches to the Inner World” or read the summary article for more details about Kalsched’s work at pacificapost.com

Listen to Donald Kalsched’s full talk from the “Response at the Radical Edge” Conference, recorded June 18, 2017, at Pacifica Graduate Institute 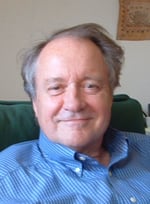 Donald Kalsched, Ph.D., is a Jungian psychoanalyst and clinical psychologist. He is a senior faculty member and supervisor with the Inter-Regional Society of Jungian Analysts, and teaches and leads workshops nationally and internationally. His celebrated book, The Inner World of Trauma: Archetypal Defenses of the Personal Spirit, explores the interface between contemporary psychoanalytic theory and Jungian theory as it relates to clinical work with survivors of early childhood trauma. His recent book, Trauma and the Soul: A Psycho-Spiritual Approach to Human Development and its Interruption, explores the mystical dimensions of clinical work with trauma-survivors.