Deborah Quibell is many things, but she is archetypally a Creator. At least that’s how I know her. I met her several years back when she entered into the newly launched Jungian and Archetypal Studies program at Pacifica. I am now her dissertation chair, which is a distinct pleasure because part of how Deborah creates is through writing. She’s good. She’s damn good.
Deborah is always writing. Besides writing mystical poetry (which she shares for free on Facebook), besides writing her dissertation, she regularly contributes to an online mag called Rebelle Society. Her most recent piece is called “Pound Your Chest. Everyone. Pound It”. In this piece, she reflects upon the recent crisis in police “insecurity” following the Michael Brown and Eric Garner cases. She linked to it on her Facebook page, writing, “Wrote this yesterday because I couldn't not. This. Perhaps more than anything I've written or published.”

In her piece, she links to a YouTube video she had watched where “a group of Broadway stars, directors, producers, musicians, choreographers, designers and technicians gather in Times Square in front of the NYPD office with a peaceful, artistic protest about police violence and the death of Eric Garner (and Michael Brown).” In the video, fellow creator Daniel J. Watts, wearing a t-shirt which reads “Love Terrorist,” delivers a moving spoken word protest piece while a group behind him pound their chests and hum their convictions. At the end of the piece, Watts repeats “This is how we shoot back” as he walks away and the crowd disperses.

For archetypal Creators, this is how they shoot back.

Deborah then links to a Jon Stewart bit where he offers his reflections. We are used to his incredulity and his sarcastic satire, but what is particularly moving about this piece is his obvious anger, frustration, and despair. In the video, Stewart says, “I know doing those bits helps no one. Other than us, here at the show, individually as a creative outlet, a catharsis, a way of processing emotion that might otherwise be undigested.”

For archetypal Creators, this is how they process emotion.

In Deborah’s piece, she writes, “Healing through art. Dialogue through inspired verse. I wanted all artists to Rise Up. Pound your chest. Speak to your grief. Sing your sorrow. Paint the despair. Ask for hard conversations. Let it out.” This is exactly what Deborah has done. She has added her written piece to Watts and company’s musical piece and Stewart’s comedic piece. A symphony, to address the cultural cacophony.

For archetypal Creators, this is how they heal through art.

In the Engaged Humanities and the Creative Life program at Pacifica, we have a course called “The Artist as Activist and Agent of Social Change.” The first line of the course description reads, “Artistic expression has always had the power to raise consciousness and contribute to social change.” In the course, students study such expressions—sometimes individual expressions, and sometimes time periods when artists rise up and collectively and consciously create as activists and agents of social change.

The next time the course is taught, look for Deborah Quibell, Daniel J. Watts and company, and Jon Stewart. They’ll be there on the syllabus, pounding their chests.

For archetypal Creators, this is how they change the world.

Jennifer Selig, Ph.D. is faculty and former chair of the Jungian and Archetypal Studies specialization at Pacifica. Based primarily on the work of C. G. Jung and James Hillman, the Jungian and Archetypal Studies program takes depth psychology out of the clinical consulting room into the world at large, critically exploring a range of topics central to our understanding of the role of the unconscious psyche in human experience. 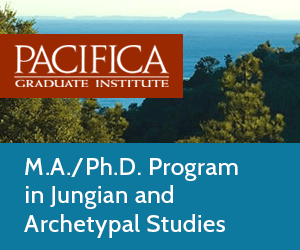