My Travels with Joseph Campbell 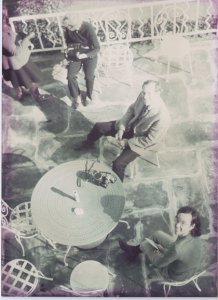 In the summer of 1988, after returning home from my first teaching job, at a small college in Switzerland, I saw segments of the PBS series, “The Power of Myth,” in which Joseph Campbell told Bill Moyers about his days as a student in France during the 1920’s. With characteristic zeal, Campbell recalled his daily visits to the Cathedral of Chartres, during which he identified every single figure in its Biblical pantheon, whether stained in radiant glass or carved in immemorial stone. He became such a familiar figure that one day the sexton entrusted him with an extraordinary task.

“Would you like,” said the sexton, “to come up with me into the belfry to ring the noontide bells?”

Who could say no?

Campbell ascended the famous steeple into the belfry, where, with a magnificent breeze whistling through the stone windows, he climbed onto one side of a seesaw to begin rocking the enormous bells beneath him.

As I listened to Campbell share this precious memory of his youth with the TV audience, equally precious memories of my own returned. I had heard that story ten years before, when, during a tour of Northern France in the fall of 1977, Campbell told it to me as we sat together on the bus, heading into Chartres at twilight.

It was near the end of a really terrific week, which had included visits to Rouen, Amiens, Mt. St. Michel, the standing stones of Carnac, the medieval forests of Brittany, the chateaux country of the Loire river valley, and then on to Paris.

Campbell beamed with delight in his window seat beside me, looking out at a host of chateaux entirely invisible to me: he had piercing blue eyes, and knew the terrain well—where to look beneath a cluster of trees, or behind a tiny copse in the distance, for the noble relics of the Middle Ages.

We’d had lunch on the grounds of one of the chateaux earlier in the day, sitting beside the still pool that surrounded the beautiful building, which was perfectly reflected on the surface of the water: spires, towers, turrets, crenellations, copes, and barbicans—all perfectly replicated, though pointing downwards, in the serene mirror of the pool’s surface. The castle shimmered, above and below the water line, a dazzling white surrounded by a bevy of immemorial oaks.

It was as if we had stepped through a hole in the hedge into another world, or as if we had passed through a door of glass into the mysterious chambers of Glastonbury Abbey, where Arthur and his court danced the Nine Men’s Morris.

Our group had stopped earlier in a little pub in the woods of Brittany, to have a cup of cider, some cheese, and to enjoy the fine hospitality of our perfectly darling old French host, a diminutive white-haired dwarf with a mystical sense of humor. After several glasses of cider, we strolled down the long path outside the pub, which led into the woods where Vivian had beguiled Merlin—a picture of which he had carved into the cedar panels of his bar. Stopping beneath a tremendous flowering hawthorn, the old man said to me:

And I could well believe him.

Deep inside the woods, where our group walked after lunch, we all sat down in a circle, sitting on logs and fallen tree trunks amidst the briars and a scattering of Amanita muscaria mushrooms.

“Don’t eat those,” Campbell said, “or we’ll never get to Paris!”

Dr. Evans Lansing Smith, Ph.D. has degrees from Williams College, Antioch International, and The Claremont Graduate School. He is the author of eight books and numerous articles on comparative literature and mythology, and has taught at colleges in Switzerland, Maryland, Texas, and California. In the late 1970s, he traveled with Joseph Campbell on study tours of Northern France, Egypt, and Kenya, with a focus on the Arthurian Romances of the Middle Ages and the Mythologies of the Ancient World.