ILLUMINED: Mandalas and Mythos Across Art and Time

L.A.-based artist David Orr will be presenting “ILLUMINED: Mandalas and Mythos Across Art and Time” to the Joseph Campbell Foundation Mythological RoundTable® Group of OPUS on Sunday, October 6th from 5:30-7:30 p.m. at Pacifica’s Ladera Lane campus. This event is free and open to the public. For more info, visit opusarchives.org/events. 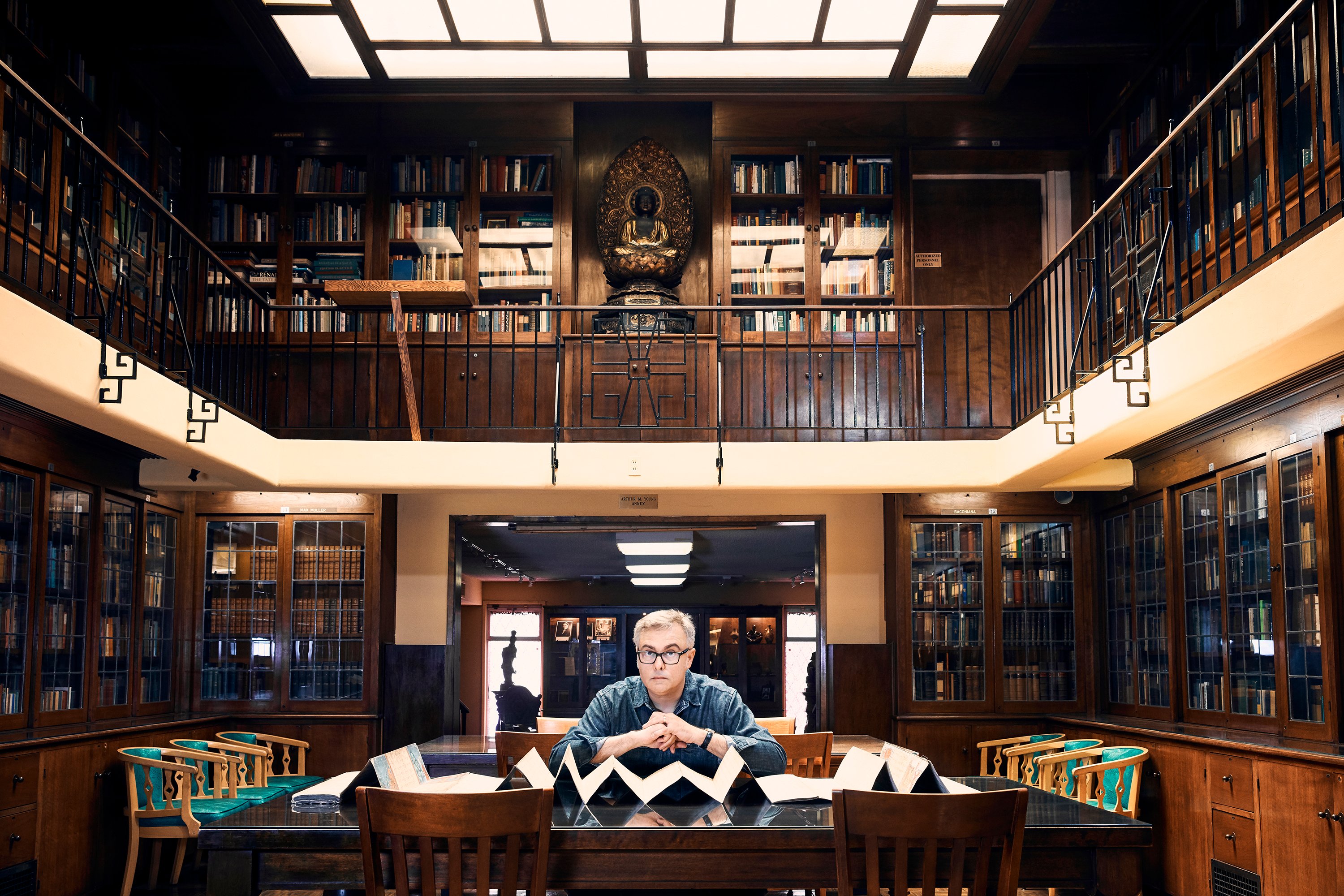 Devon Deimler, PhD: Can you tell us a bit about your artistic process for creating the ILLUMINED series? What are some of the mystical, sacred, and philosophical texts you’ve worked with?

David Orr: I’m an avid reader, and love books as objects in themselves. I’d been thinking of the Daoist saying: “the deepest truths can never be captured by words alone,” and wanted to create purely visual, meditative symbols out of images of books.

I was lucky to have a residency at the Philosophical Research Library, which gave me access to a wide array of texts: Chinese, Hindu, Japanese, Javanese, and Tibetan Buddhist sūtras; a Francis Bacon first edition; Occult, Rosicrucian and Theosophical manuscripts, books of hymns, and so on. Part of being human is being driven by the need to make sense of the world around us — be it rational, mystical, or philosophical. Over the centuries, we’ve developed these intricately constructed belief systems which address that need, which is universal. As Campbell himself put it: “Why is mythology everywhere the same, beneath its varieties of costume?”

I felt I’d been successful in this project when a Vedantic monk, who visited the PRS exhibition of ILLUMINED weekly over its six month run, told me that he felt as if each work was reaching out just to him. His favorite piece was a recombination of The Psalms of the Singer David, making me feel as if the work had managed to cross a divide of sorts.

DD: Did you know when you started photographing these texts and working with them digitally that they would take on a mandala form, or did that emerge in the process?

DO: I had photographed tests in advance, and knew that each end image would take a mandala-like form. Any mandala is meant to serve as a representation of the universe, and each of these belief systems describes a universe, so it fit conceptually. The specific configurations emerged during the process, evolving directly from the unique material qualities of each text in combination with their contents. There was an incredible range in the kinds of source material I found and photographed: some lavishly illustrated, some beautifully handwritten, some typewritten, some traditionally printed and bound, some just loose pages in a casing, some fragments well over six hundred years old. As the project progressed, I began to feel that the books were guiding me in how to approach them. The result was that within a series of mandalas there’s a great amount of variation.

DD: How has C. G. Jung’s writing on mandalas inspired or informed your work and your own perspective on the mandala form?

DO: The Red Book was an obvious influence, of course. Early in the process, I’d begun to notice that a circular form was appearing in every tradition and discipline. When I read Jung’s observation that the mandala form has consistently been the shape used to express wholeness, surfacing in virtually every culture, from ‘primitive’ sand drawings to cathedral rosette windows, it set me on a course to use the form as a coherent way of representing a diverse series of beliefs.

But Jung’s writings have served as an enormous influence on me in general. There’s such a vast range of ideas. The collective unconscious, of course. But also Jung’s ideas of unity that led him to the Tao. His ruminations on Pythagoras and the monad. His exploration of alchemical thought as a bridge from Gnosticism to present day. His interest in the anima mundi which in turn brushes against panpsychism (the theory that all matter has consciousness and is therefore interconnected). Many of these ideas are over fifty to one hundred years old, yet still regarded as radical.

DD: Where do you see mandalas appearing in our culture today?

DO: As ‘mandala’ is Sanskrit for ‘circle,’ on a general level you can see them everywhere, from manhole covers to author photos on news outlet websites. But if there’s an example that speaks to a current cultural preoccupation of ours I would argue that we live in a time when information itself is regarded as sacred, and its arrangement in graphic form is still most often presented in mandala form. If you look at most information graphics — be they CERN’s renderings of particle diagrams, word clouds, cutting-edge infographics, or the lowly pie chart — all share that circular motif, with visual information radiating out from a center.

David Orr is a visual artist based in California. He exhibits his work internationally and has spoken about his work at a wide range of venues including Cal State LA, the College of Physicians of Philadelphia, Death Salon, Dublintellectual Ireland, The Director’s Guild of America, The Mütter Museum, The New School, Parsons School of Design, Reed College, UCLA, and The Philosophical Research Society (PRS). David served as curator at PRS and established the PRS arts program and Hansell Gallery. He is a member of The Long Now Foundation.

Devon Deimler, PhD, is Curatorial Assistant at OPUS Archives and Research Center, as well as Leader of the Joseph Campbell Foundation Mythological RoundTable® Group of OPUS. She earned her doctorate in Mythological Studies with an Emphasis in Depth Psychology from Pacifica Graduate Institute and has extensive experience in the fields of art and music. She is founder and curator of the Cinemyth Film Series at the Philosophical Research Society in Los Angeles and is currently teaching modern art history and studio art at American University Preparatory School.