For four centuries now, we have been assured by experts of various kinds that matter is nonliving, that the world is a human “resource,” that we are machines, and that our interiors are just language-generating neurons. Before that, we were told not to take nature, place, or Earth as more than illusions; that the grandest drama went on elsewhere. William James called this reductive thinking the “Nothing But,” and he left mainstream psychology because of it. (During an 1894 debate hosted by the American Psychological Association, James bitterly suggested that the debaters “both react at a given signal, and the one whose reaction-time is longer shall be declared psychologically dead.”)

James was one of us, and we have always been here, we depth psychologists. Found in every culture, we have been sought out for synchronistic reads on events, for deep healing, for visionary assistance, for interior wisdom, for access to soul, for help with dreams. 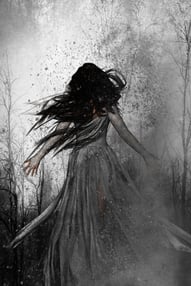 Another of us, Aesara of Lucania, wrote a book called On Human Nature, the first psychology book ever written. We have, alas, only a single page, but it offers us a glimpse of her psychodynamic model of the self, a self actuated by spirit, mind, and desire, and intimately embedded in social relations. She seems to have written it to help us come home to ourselves, which for her aligned with coming home to each other in friendship, justice, and joy. Her tone is one of enchantment; you can feel it when she observes with appreciation that “the mind becomes lovely through education and virtue.”

Some depth psychologists are found within religious traditions. One of them, Muhammad Ibn Umail (900-960 CE), known in the West as Senior, was a Muslim. He was also an alchemist; matter fascinated him. Ibn Umail was among the first in our tradition to suggest that mixing chemicals and making scientific tools was not only a literal endeavor, but a symbolic one as well. “Turn the gold into silver,” he advised the alchemist. Take what is surface and daytime evident and look for the metaphorical, the imaginal, the lunar, the psychological in it. Look for the depth.

As Victorian science beat the colonized world into battleships and suspension bridges, filling it with hardware but depriving it of presence, women patients began speaking up for the nature silenced in themselves. One was Rika van B., age 22, a patient of Dr. Dutch physician Andries Hoek. When he hypnotized her to relieve her amnesia, depression, and suicidal urges, she insisted on telling him the story of her life and sufferings. Then, while still in trance, she began to direct the course of her own therapy. She was in no hurry to get rid of her “madness,” she told him. She wanted to uncover its roots. Once she understood her own story in a new way, the symptoms disappeared, having served their purpose. Similar cases would inspire French physician Pierre Janet to coin the word “subconscious.”

Relying on the power of reenchanted stories to heal us, realign us, and bring meaning has been integral to depth psychology before it had a name. Freud’s most powerful childhood dream dazzled him with imagery from Egyptian mythology. Jung’s dream brought him into the frightening presence of an underground pagan god.

Even after these men became psychiatrists, they insisted that explorations of the depths of the psyche should not confine them to the clinic. Gustav Fechner is known usually as an experimentalist, but after losing his vision for a time, he opened his eyes one day and saw a world of wonder filled with soul. Writing under a pen name so his scientific colleagues would not denounce him, he compared Earth’s flight through space with that of a breathing angel.

“Enchantment” goes back to words that mean “in” and “to sing.” To be enchanted is to be in someone’s song; to practice depth psychology, for me, is to learn more and more about the singer and the song and to add a few creative phrases. What song am I in? Who is singing me? Where is my voice in the unfolding composition?

Janet and Freud taught us that there is more at play in the psyche I call my own than little old me. Entire symphonies of voices and melodies and dissonances and harmonies resound there, the notes and refrains moving freely back and forth between what we like to divide up as inner and outer, me and world. Picking up this tune, Jung enriched it by showing us how in all times and places, the psyche generates sacred imagery, surrounding us with enchanting motifs that continually return to life. Whether we practice theism, atheism, animism, pantheism, or some other variant, the flow of spiritual symbols goes on and on, catching us by our fascinations.

By revealing how close we stand to mysterious depths of self and world, even in—sometimes especially in—our blind spots, slips, and imperfections, depth psychology reenchants our relations with ourselves, each other, our planet, and the cosmos.

Psychology has spent so much time studying the pathological, the shadowy, and the traumatized that we sometimes forget how wonderful psychological life really is. Imagine Karen Horney’s awe to find in her struggling patients a striving, often unconscious, not just for power or glory, but wholeheartedness. Adler’s, to trace the goal-seeking complexities of the life stories we make use of. Hillman’s, to find that complexes, those knots of trouble we harbor, can be polished bright, like gems. In each wound is a shine, a message, a voice trying to sing.

We also forget to step outside, as Jungian analyst Jane Hollister Wheelwright invited, to share in her moment of wonder: “I finally reached the realization that the Divinity still needing human recognition is our own planet earth in our solar system.” To deeply realize this, is to evolve from a helpless witness to local and planetary ecocide to an advocate of ecological integrity, beauty, and justice.

At the end of the film Fantastic Beasts and Where to Find Them, a group of wizards walks out into the destroyed streets of New York City and, raising magic wands, repairs them: outdoor conductors weaving an enchanted symphony. That is what depth psychologists do every day with storytelling, listening, and imagining. Instead of imposing plans from the top down, we wield our peaceful tools of wonder to enchant the world we live in with glimmers of magic from the world we dream of. As in the Chinese fable of the Yellow Emperor’s wondrous kingdom, we look forward to the day when the realms will finally align.

Craig Chalquist, Ph.D., is Associate Provost of Pacifica and Director of the Certificate in Enchantivism. https://retreat.pacifica.edu/certificate-in-enchantivism/  Email the Retreat Center for more information about the Certificate.

Craig earned his Ph.D. in Depth Psychology at Pacifica Graduate Institute and also holds a Master Gardener certificate and another in permaculture design. He is the author of Terrapsychology: Reengaging the Soul of Place (Spring Journal Books, 2007) and co-editor with Linda Buzzell, MFT, of Ecotherapy: Healing with Nature in Mind (Sierra Club Books, 2009). Craig was core faculty in East-West Psychology at the California Institute of Integral Studies and former core faculty at John F. Kennedy University, where he served as acting department chair (Consciousness & Transformative Studies), designing and launching the world’s first ecotherapy certificate. He also is founder of Immanence Myth Journal http://www.immanencejournal.com