Up Against the Wall Re-Imagining the U.S.-Mexico Border

A guest post by Dr. Mary Watkins and Dr. Ed Casey. The following is excerpted from their insightful book Up Against the Wall Re-Imagining the U.S.-Mexico Border 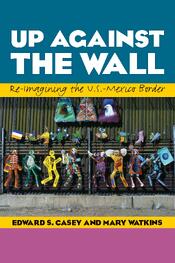 We live in an era of forced migration with unprecedented global dimensions. How are we to peaceably and justly co-exist together -- those of us who must leave our homes forever to meet our human needs, and the rest of us who find our neighborhoods, towns, and cities changing as a result of these necessary migrations? In particular, how can we create a compassionate and just response to new neighbors who have come to the United States to find work or asylum?  We offer this book as an invitation to a sustained reflection on these questions.

Migration is “forced” when people flee from ecological degradation and devastation, violence (war, civil wars, drug wars, and genocides), severe governmental corruption, failing or inadequate infrastructure, and absolute destitution.[i] Desperate unfulfilled needs for adequate food, shelter, healthcare, education, and employment drive people to cross national borders, leaving their family, friends, home communities, and countries of origin. If all current international migrants on earth formed a single nation, it would be the fifth most populous on the planet, roughly the population of Brazil. The number of migrants is growing. We are neighbors.

Throughout the world, citizens of nation states that are relatively more prosperous are grappling with their new migrant neighbors along a continuum from outright and often violent rejection to empathic hospitality and welcome: Israelis with Eritreans, French with Gypsies, Spanish with Moroccans, Danes with Tunisians, Chinese with Vietnamese, Indians with Bangladeshis, Mexicans with Guatemalans, Americans with Mexicans. Nations all over the earth are building separation barriers to literally wall out those attempting to enter under extreme duress: i.e., Greece against Turks, India against Bangladeshis and Burmese, Iran against Pakistanis, Israel against Palestinians, South Korea against North Koreans, Saudi Arabia against Yemens and Iraqis, The European Union and Spain against Africans, Thailand against Malaysians, and the United States against Mexicans and others from Latin America.

As climate change and global income disparities worsen, the number of environmental and economic refugees will further increase, making it imperative for us to re-imagine not only the character of international borders, but the human character we seek to cultivate that can guide us toward peaceful and just co-existence. As it turns out, these twin goals are inextricably linked, and best pursued side-by-side, as we do in this volume.

In this book we pursue the re-imagining that our present crisis of forced migration requires, through a close consideration of the situation at the U.S.-Mexico border and the shadow this situation casts upon Mexican and U.S. communities far from the literal border. Chicana writer Gloria Anzaldúa (1999) describes the U.S.-Mexico border as an open wound, “una herida abierta, where the Third World grates against the first and bleeds” (p. 25). Nowhere is this wound between the first and third worlds as gaping as it is between the U.S. and Mexico. Here the self-proclaimed “leader” of the “first world” tries to close off its lands like a gated community, locking newcomers out, as if ironically forgetting that most of its own ancestors were themselves newcomers to Native American and Mexican lands.

Approaching global forced migration through a stark confrontation with the formidable wall recently built at the U.S.-Mexico border, we will grapple philosophically with the nature of borders. We will bring you up to the wall itself, not neglecting its sheer physicality and varied design. We offer a view from the wall of the stark display of the vexed dynamics of forced migration. An international border such as that at La Frontera(the Spanish name for the U.S.-Mexico border) is a place where we can see very clearly what is happening in the face of pernicious forms of globalization, a vision that is critical to our being able to re-imagine national borders and the relation between settled citizens and newcomers without prescribed documents.

We examine not only the literal separation wall at the U.S.-Mexico border, but also the less literal—but no less real—“walls” encountered between U.S. citizens and their Mexican neighbors[ii]now living in American cities and towns: barriers equally fateful in their consequences. As migrants cross the death-dealing desert and mountains at La Frontera, the initial woundings at this international border are harshly repeated in the towns and cities where they try to settle, too often finding themselves once again locked out of basic human rights. Multiple forms of political, economic, and social exclusion, reinforced by racist projections, create daily “precarity” (Butler, 2006), including the overhanging threats of detention and deportation.

[i] 24% of the world’s population, or 1.7 billion is living in absolute poverty; one in four human beings on earth does not meet their caloric needs each day, does not have access to clean water, and has no hope of being able to improve their situation and that of their loved ones through education or employment.

[ii] Of the 16% percent of the American population that is Latino, 63% are of Mexican descent. 75% of the 11 million immigrants without documents in the United States are Mexican.

Mary Watkins, Ph.D., is core faculty in the Depth program and serves as Coordinator of Community and Ecological Fieldwork and Research. She is a clinical and developmental psychologist and was an early member of the archetypal/imaginal psychology movement. She has worked in a wide variety of clinical settings and with groups on issues of peace, diversity, social justice, reconciliation, immigration, and the envisioning of community and cultural transformation. She is the author of Waking Dreams, Invisible Guests: The Development of Imaginal Dialogues, co-author of Toward Psychologies of Liberation, Up Against the Wall: Re-Imagining the U.S.-Mexico Border, andTalking with Young Children about Adoption, and co-editor of Psychology and the Promotion of Peace.

Edward Casey, Ph.D. is Distinguished Visiting Faculty in the Depth Program. He is also Distinguished Professor of Philosophy at SUNY, Stony Brook, where he was chairperson of the department for ten years. He is the author of eight books, among them Spirit and Soul(2nd ed. 2001), Imagining (2nd ed. 2000), Remembering (2nd ed. 2000), and most recentlyThe World at a Glance (2007). He is perhaps best known for his descriptions of the role of place in human experience; Getting Back into Place (1993) and The Fate of Place (1997) are the two major expressions of this research. He is currently writing The World on Edge. Dr. Casey is the President of the American Philosophical Association, Eastern Division.