Why alchemical psychology matters to me

It all started 46 years ago when, after a long and almost fatal illness, I ended up at the 1971 Eranos conference for my honeymoon. After close to a year in the hospital, Western medicine was no longer the ‘be all and end all’ of healing for me. I had experimented with psychedelics (it was the 1960s after all), and my perspective on life exploded. At Eranos, learned people talked about a cosmos alien to anything I had ever heard of and yet it all felt eerily familiar. I walked up to a comparatively young man standing by the open terrace doors during the intermission of a fascinatingly incomprehensible talk in French and said to him: “Dr. Hillman, I have used LSD and I’m trying to make sense of it.” I had his instant attention. I was 23 and he was 45. My children are now around the age he was then.

I started to attend the Jung Institute in Zurich and my wife and I became secretaries to the Eranos Foundation. From then on my fascination with alchemy never left me. 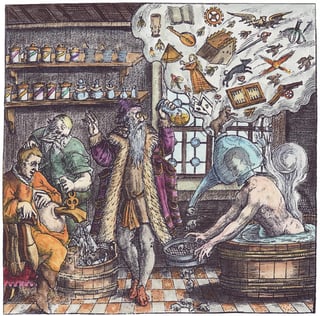 Over the decades between then and now I learned that alchemists of old talked about a world in which each atom, everything that matters, coagulated around sparks of creative essence. They called it heaven, caelum. According to them, the world we encounter is in a constant state of creation, always on the cusp. Yet we appear to live in an encrusted frozen world of illusory stasis. Matter craves the fire in order to melt back into its original state of creative flux. That’s why mercury – called live silver (argentum vivum) and sacred to Hermes, god of constant change – was so important to alchemists. It was not rigid like the other metals; it flowed fully alive from one state into another. In their laboratories alchemists caused this metallic life force to copulate with other metals, chasing it from bridal suite to bridal suite, causing mayhem to all static forms around them. It was the original ‘out of the box’ force of endless renewal and change. Healing was alchemy’s most important by-product: the healing of metals from sick (lead) to vibrant (gold), and the healing of patients. Most alchemists were physicians. Within two years after the start of my analysis all my physical symptoms, intractable to Western medicine, disappeared.

Here we are in 2017, the world is on the move; 60 million people are displaced and overwhelming change terrifies people. On the one hand it makes us more encrusted and rigid than ever, violently longing back for a time that never was, while at the same time we see opportunities for potentials that have never existed before. Hermes now talks to us through smart phones and the internet of all things; smart critters everywhere around us take away our work and leave us jobless. The world of Nature appears overrun by toxins turning ecosystems into what alchemists used to call nigredo, the blackness of disintegration. How can we find our attitude in such a world of monumental change?

My life has been in constant motion. I’ve lived on 4 continents, in a state of permanent travel. Alchemical psychology got me through, enabling me to experience each moment as a laboratory experiment where the old dissolves and the new is not yet. I know how terrifying this state in-between is, waking me up at 3 am in a state of OMG! I have learned that this world in-between is called imaginatio vera, true imagination, the mediatrix between eternal truths and the suffering of mortality. This mercurial world of flux is one of continuous encounters. Presences from dreams and situations in day-life need unpeeling so the creative sparks within – sometimes dark as Hell – can stand out and bring us to the verge of understanding … only to slip back into primordial confusion towards a next encounter with reality.

I have found that this attitude of almost-getting-it has kept me vibrantly unwise, like the alchemist whose magic gold seems to always slip through her fingers. It has kept me flexible and has refined my attitude to change. I don’t go nostalgically rigid or become progressively optimistic, falling into the optimist’s despair. Alchemical psychology makes me explore each encounter from a variety of perspectives, relativizing the habitual consciousness I know by my own name. I remember James Hillman muttering: “Who the hell is this ‘James Hillman’?” Maybe I have become more empathic because of my constant attempts to shift away from my habitual perspectives into those of the imaginal beings I encounter and the viewpoints of people from cultures other than my own. Maybe the medium of my life-on-the-verge has become a bit more subtle over time, enjoying a greater plasticity and versatility. My substance might be more capable of adaptation.

But one thing I do know: without alchemical psychology I would be a considerably greater mess than I am now. Now flowers grow from it. 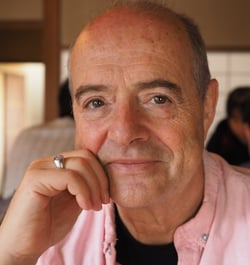 Robert Bosnak is an internationally noted Jungian psychoanalyst with 45 years of experience. He is offering a Pre-Conference Workshop as part of the Pacifica Conference Ars Alchemica: The Art & Alchemy of Transformation, Friday, August, 25, entitled, “Daily Life against a Background of Alchemical Colors: Green, Black, Blue, White, Yellow, Red.” For more information: https://retreat.pacifica.edu/ars-alchemica/