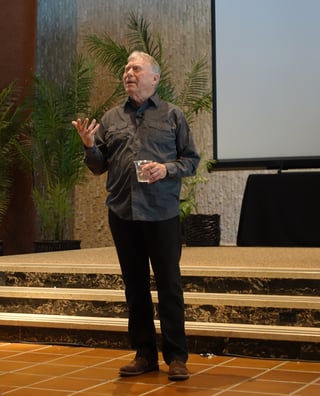 In the poem, the ba soul tells the man to honor the gift of his life; to find his “jubilee” and discover the way to live from there. It is a call to return to the birth of the spirit of one’s life, and to draw from it. We are in a struggle to reconnect to the soul of the world, the anima mundi, and the answer is in the soul, Meade insists, citing another poem, this from Theodore Roethke, “In a Dark Time,” which begins with the line, “In a dark time, the eye begins to see…” and goes on to state:

I know the purity of pure despair,
My shadow pinned against a sweating wall.
That place among the rocks—is it a cave,
Or winding path? The edge is what I have…”[1]

Meade has been collecting myths about the renewal of the soul for years, and he tells them elegantly and jubilantly with the use of a drum, a rare treat to watch or listen to. The movement of psychology into the archetype of pathology has generated a lot of learning, Meade continues, but the archetype of healing might be the edge that would move us forward – the healing “edge” can be redemptive, making each of us renewed. In fact, going back to the beginning and renewing the potential can be one of the most healing things a group can do together.

“The dream of the beauty of nature in its diverse dynamic has been disrupted in so many ways. We have fallen out of the dream,” Meade reflects, but “if we will look into darkness, we will find something there which on the individual level is the image of the soul.”

While anxiety is a collective presence that even children feel these days, and it typically manifests alongside collective fear, we are in an alchemical solution. Alchemically speaking, we have to disintegrate before we can move into a more creative phase.

Meade offers that there are three levels of life, or three layers of the world. The first layer of life is daily life, regular expectations, and civil society – people following rules and engaging in civil discourse. Level two is where negative emotions exist, including anger, hatred, venom, revenge, jealousy, envy, traumatic memory, and intense fear. This level of emotions is situated just below the first level of “everyday life.” What’s happening now is that the second level of life has erupted into the first level, Meade observes. The first level can no longer repress the second, and we are facing what Freud referred to as the “return of the repressed.” 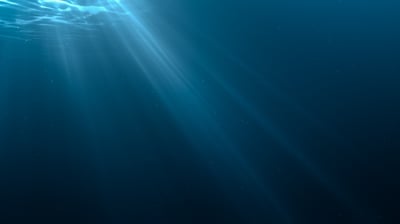 The third layer of the world is mythology, the deeper ocean of being. We need a mythic perspective on our current situation. The old Greek word Apocalypsis means to lift the veil, for example. When the veil lifts, we see the thin veneer of civilization cracking. It also means “collapse renewal”– an uncovering and then discovering. This is a very archetypal dynamic, and when we begin to understand this deeper meaning, we can gain context and meaning to what is happening now.

We are in a state of tension right now where it seems the unthinkable can occur without warning, states Meade, but “either we can be overwhelmed by the disturbing waves of chaos and animosity and vitriolic energy, or we can connect to the depth of the soul and reconnect to the dream of our lives and use that as a vehicle to reconnect into the dream of the world. If we [aren't] aware that we have [this] choice to be part of the re-imagination of the world, then we can get swamped in the waves of chaos.”

We have to tune in to the instinctive sense that there’s a deep sense of soul inside ourselves that has value and something to contribute to the world. And it is being called upon and very much needed in the world today. The “Jungian project of the deep self” has tremendous value were it to be understood at different levels of life and not simply held in a more esoteric vessel, Meade maintains. What is the edge for depth psychology? If it is carrying both intelligence about pathology and knowledge about the curative redeeming essence of the deep self, then how does that idea about psychology as mythology get back into the culture?

The antidote for the loss of the dream of life has to be something as deep and as well as powerful. One of the beautiful things about the deep self is that the human soul is equal to the world if it awakens—not equal in ego, but equal in essence. The human being is a microcosm of the macrocosm.

Depth Psychology has to cross the edge where psychology turns into mythology in order to deliver to the world, Meade believes, because people can’t take in all the ideas of psychology as readily as they can take in stories.

We have fallen out of one story. People think about the end of the world; they don’t realize it’s already ended. The world that we thought we knew is long over. There is no going back. We are just trying to find footing in a new world, which requires stories. The cutting edge of depth psychology, which was in some way an antidote to literalism, is the power of myth—the place where endings become beginning, Meade observes. We have to become mythic again as an antidote, especially to what’s happening in cultural politics at the present time.

The movement of depth psychology is the movement toward the soul. It’s not the hero’s myth; this story can only take us across a certain terrain where the hero is masculine. The hero’s myth may not be the right myth to help people find the story within their own soul. We each have a genius within us; It comes by virtue of having a soul. In his book, “The Genius Myth,” Meade defines “genius” as “the spirit that is already there.”

Accompanied by his drum, Meade recounts a powerful myth from India, which involves the “churning of the milk ocean.” In the story, beauty, wisdom, and wonder disappear from the world and it becomes nothing but conflict. The world is being destroyed by opposition, polarity, conflict. The gods devise a plan; to churn the ocean in hopes of bringing all the beauty, wisdom and wonder back. What first comes out, however, is poison which threatens to destroy the world. Shiva comes to drink up the poison (which is why his throat is blue), and just as the poison is headed for heart, his partner saves him and he chokes it up.

What of us can act like Shiva? How do we take poison out of the world? Native Americans say everyone born with medicine can help heal the world, Meade points out. We have to reflect on what we can offer to help to get us get back into the dream of life. We don’t have to reach all the way across the gap; we just have to get far enough that the Other reaches for us. The divine needs its creature; It’s longing for those living in the realm of time. Ultimately, our job is not to save the world, but to become more of who we are.

That third layer of life, that mythological layer that comes after the “everyday” level and the layer of “emotions” is the place where universal love (sisterhood and brotherhood) exists; where beauty is found, where wisdom dwells, and where grace happens, Meade reminds us. The only way to go from bottom of despair is to go to beauty, wisdom, and grace. To sustain ourselves in the chaotic ways of modern life, we need a practice which allows for a re-imagination of the whole and our part in it. We are being asked to creatively express in the world what we have been given.

As more and more people become marginalized in current culture, the only way to get through is by awakening to a vision that is genuine to each of our lives; by finding a way to turn it into a creative vision, and by offering it to help others. We can become agents of ongoing creation. “Creating is happening all the time and we are invited to participate,” contends Meade.

In the end, we can identify deep suffering and build ritual around it. It creates a kind of “radical vitality,” he affirms. Through it all, we can encounter “the edge where despair turns into creativity, where loss turns into a recurrence of the divine, where imagination is pulled from the darkness—and then the world returns as the place of wonder and beauty and diversity that it’s intended to be.”

Listen to the full keynote talk by Michael Meade, “Touching the Soul of the World: A Mythological and Soulful View of Chaotic Times” here:

Michael Meade, D.H.L., is a renowned storyteller, author, and scholar of mythology, anthropology, and psychology. His hypnotic and fiery storytelling, street savvy perceptiveness, and spellbinding interpretations of ancient myths are highly relevant to current culture. He is the author of many books including Fate and Destiny: The Two Agreements of the Soul and The World Behind the World. Meade is founder of Mosaic Multicultural Foundation, a Seattle-based nonprofit dedicated to education and cultural healing. For more information, visit www.mosaicvoices.org.