The History of Pacifica 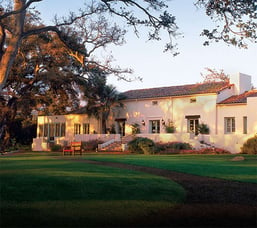 Just minutes from one of the most beautiful isolated beaches, nestled among old-growth oaks between the mountains and the sea, lies Pacifica Graduate Institute. Founded over 40 years ago in Isla Vista, California, Pacifica's mission is to foster creative learning and research in the fields of psychology, mythology, and the humanities, framed in the traditions of depth psychology by creating an educational environment with a spirit for free and open inquiry. Pacifica is dedicated to cultivating and harvesting the gifts of the human imagination.

Although Pacifica Graduate Institute dates its official forty year life as an educational institution to 1976, when as the Human Relations Center, it offered a Counseling Skills Certificate Program, it really began as a yearning toward service in the hearts of several individuals many years earlier.  Pacifica's genesis was in response to the Vietnam War and the cultural upheaval of the 1970's.  In the university town of Isla Vista, California, a group of concerned individuals saw returning veterans, families and young people in distress. They gathered resources and developed a community counseling outreach program to aid those around them.

What was then known as the Human Potential Movement influenced both the degree program and its founders. Following the push of the times and their own calling, they attended workshops at the Esalen Institute. There they came to know Joseph Campbell, James Hillman, and the work of Marion Woodman, several of the pioneering thinkers who made frequent trips to Santa Barbara as the school and the programs evolved. The 1976 inauguration of a nine-month, paraprofessional “Counseling Skills Certificate” program offered by the Human Relations Center quickly gained support from the local university as well as State and County governments. Each of those institutions sent many of its students and employees through what became a powerful training experience.

The program built on the basic skills learned during the peer training. Theoretical issues were presented in greater depth as both research and practicum supervision were intensified. These educational programs were offered under the auspices of the newly named “Human Relations Institute.” The success among the students of the Counseling Skills Certificate program and the respect accorded them throughout the community led to the development of the next phase of the Institute’s programming – the Master of Arts in Counseling Psychology. This two-year graduate program continues through this day, combining rigorous academic study with solid clinical experience.

Much care and attention took place in the development of a rigorous curriculum that offered a strong academic background in the theories, ethics, methodology, and historical foundations of clinical psychology, as well as providing course work in the effective development of therapeutic skills.  It became clear that the vision of the organization had begun to shift away from a social service delivery system, towards a graduate institution grounded in the convictions of depth psychology. This new vision necessitated the formation of a private corporation, the Santa Barbara Graduate School, Inc., which for identification purposes, retained the name Human Relations Institute, with Pacifica's first President, Dr. Stephen Aizenstat, now serving as Pacifica's Chancellor.

With the dawn of the first Master of Arts program, the Human Relations Institute seeded an orchard of new programs from 1984 to 1989, including a Master of Arts in Counseling Psychology with emphasis in Depth Psychology (1984) and a Doctor of Philosophy in Clinical Psychology with emphasis in Depth Psychology (1987).  Coursework included in-depth studies of Freud, Jung, Hippocratic medicine, dream interpretation, mythology, and classical literature. Students in these programs attended monthly three-day weekend sessions at La Casa de Maria Retreat Center on El Bosque Road, making it possible for students from all over the United States and around the world to continue their existing life commitments while also participating in a unique course of study here in Santa Barbara.

The seeded programs now had a new parent-corporation and thus needed a real home in which to establish roots, grow, and bear fruit. In 1989, the principals acquired and renovated an estate located just below the foothills in coastal Carpinteria, a community a few miles south of Santa Barbara, and renamed it Pacifica Graduate Institute, a name they felt addressed the school’s goal of serving soul in the wider world. 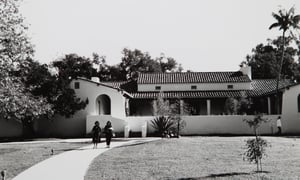 When Pacifica purchased the property in 1989, the once estate, became the new permanent home of Pacifica Graduate Institute.  Many of the buildings making up our now 13-acre campus are original to the former private estate of Max Fleischmann.  When Fleischmann built his estate in 1924, his goal was to rival his contemporaries.  Both his land and home alike were exquisite and included 1,200 acres of gardens and a conservatory that housed one of the largest organs ever made. Since then, the estate has been transformed to serve Pacifica’s mission: animae mundi colendae gratia (tending the soul in and of the world) and its student population, including the original conservatory which was transformed into The Joseph Campbell Archives and Library.

One of the supporters of the Institute’s vision in the early years was the late mythologist Joseph Campbell. Upon his death, his library and archival collection was donated to the now Opus Archive and Research Center, an organization housed at Pacifica. This donation was the founding of the The Joseph Campbell Archives and Library, which is used by students and visitors from around the world for research.

Joseph Campbell’s book collection consists of 3,000 books, many of which have his original underlining and markings, but it is said to be only a fraction of the books he read throughout his lifetime. Robert Walter, the editor of many of Campbell's later books and Board President of the Joseph Campbell Foundation, said that Campbell would begin a new project by discarding books from his previous project in order to make room for the new books that he would need for the new project. 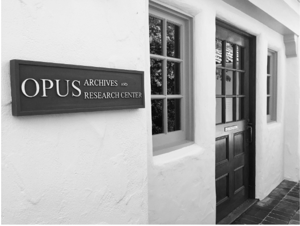 Our research library and archives are not the only aspects that draw students and visitors from our around the world, but the grounds in which our campus sits provides an experience unlike what most have experienced before from a graduate school.  Our Lambert Road campus consists of two acres of row crops, a 3-acre lemon grove, a stone- and pome-fruit orchard, native gardens with riparian wildlife corridor, Mediterranean gardens, an Australian woodland, a South African garden and a small redwood grove that acts as a windbreak for the row crops.

Besides the many garden spaces, Pacifica is home to a natural-looking grotto complete with a beautiful fountain and plants in soft colors: pinks and lavenders. This grotto and a nearby grove of gingko trees were designed per the request of former students, which part of Pacifica’s mission is to respond to student needs.   Though already serene and beautiful, plants will arch over the sandstone boulders of the grotto, creating a sacred and sheltered spot for students to visit. You will sometimes notice a box of tissue at the grotto because many of our students who are studying psychology at this level and depth experience wells of their own deep feelings. Our landscape has been designed to offer solace. Our dream has not only been to provide a school environment that nurtures our students, but also to provide them with a transformative education to take back to their local communities.

In 1995, following several years of careful design efforts, Pacifica announced the development of an innovative and unprecedented doctoral program in Depth Psychology, which examines the philosophical, cultural, and experiential foundations for the depth perspective. Program developers, who included many core faculty members, envisioned a revival of the original motivation of depth psychology: to understand and be sensitive to the forgotten, marginalized dimensions of the cultural-historical soul and to provide voice for the archetypal forces that shape the human condition. The Ph.D. program in Depth Psychology began offering classes in 1996. A short time later, the program was revised slightly to offer a combined M.A./Ph.D. in Depth Psychology.

Pacifica continued to grow as more students were drawn to the school’s unique curricula. Amazingly, we reached full capacity at the Lambert Road campus in 1999. At that time, we began offering additional sections of existing programs at La Casa de Maria’s newly established Ladera Lane Retreat Center (site of a former Jesuit Novitiate). The Institute’s programs continued to grow, and the academic curricula were refined and strengthened over the years.  Finally, after two years of complex negotiations, Pacifica became a two-campus school by purchasing the Ladera Lane center from La Casa de Maria in September of 2005.

Pacifica reached another milestone in 2005 with the inauguration of the school’s first combined residential and online program, a Master of Arts in Engaged Humanities with Emphasis in Depth Psychology. Students come to the Ladera Campus for two extended residential stays each year, and they complete the balance of their coursework online. We anticipated that this program will draw students from greater distances, including many international students, due to the shorter residential stay requirements and reduced travel expenses.

For many years, graduates of Pacifica’s M.A. program in Counseling Psychology have been asking for a Ph.D. curriculum which would assist them in deepening their work as practitioners of psychotherapy.  In early 2006, we honored that request by introducing the Ph.D. in Depth Psychology with Emphasis in Psychotherapy.  It quickly became apparent that other psychotherapists were looking for this type of professional training and growth.  Since then, the Ph.D. has been re-envisioned into the Ph.D. in Integrative Therapy and Healing Practices Specialization.

“Pacifica is a Mission with an Institute. The mission, “animae mundi colendae gratia,” (tending the soul of and in the world) has inspired a literal host of others far and wide-those who now carry the fire of the vision itself. The intensity of that calling is the seed impulse carried within the dreams of many. When cultivated, this soul spark, rooted in the animated presence of the deep psyche, opens to personal fulfillment and a more just and fertile planet. In an increasingly complex world, the scholarship and service of Pacifica’s faculty, staff, alumni, and students offers a soul centered 'intelligence' integral to what is being asked of us now.”
– Stephen Aizenstat, Ph.D., Chancellor, Founding President