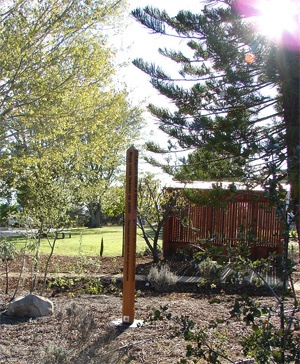 This Peace Pole called to me from across time and took me on a journey to explore its soul. What meaning does it carry for me? What brought me to it?

Sitting with a friend whose relative was a survivor of the Holocaust, I could only say weakly, “I’m sorry. There must be a lot of pain there.” My voice could not carry the depth of sorrow I felt for the loss of so many lives and the cloud that had been cast over this person’s family. It was beyond an individual to be able to bear that archetypal evil. Perhaps the presence of this Peace Pole archetype can somehow counter and help to heal that wounding. It is more than the words of my single voice alone could convey to my friend.

I know that the archetype of the Peace Pole can have this healing effect in an individual life.

When I was going through a tumultuous time in my life and felt I was about to fall apart, the voice of my Reiki Master came to me saying, “Feel the rod of power within you.” I envisioned this rod of power as the Peace Pole within my body like the sushumna connecting the energies of the chakras starting at the base and extending through the crown. The images that threatened to tear me apart turned around, like a goldfish swimming in a bowl switching directions, to become the binding energy of love again. Thus, it served as a mast inside where I could be bound to my own ship in safety, like Odysseus tethered to the mast of his ship, avoiding splitting wreckage by sailing past captivating songs on rocky island shores.

Another famous captain, Magellan, also thwarted jagged cliffs and tumultuous waters when he and his crew voyaged around the tip of South America. As he departed the treacherous strait, he came upon calm and placid seas, which he named El Mar Pacifico, the Pacific Ocean.

Our school, also carrying the Spanish name for peaceful, was named in a manner fitting its founder, Stephen Aizenstat. Searching for an appropriate appellation for the school, he by-passed several other possibilities. When an elder figure came to him in a dream and whispered, “Pacifica,” he knew that it was the right choice. Perhaps the wisdom of this image came to him from the grandfathers of the peace movement. A group of conscientious objectors in the 40’s vivified art, music, and peace by publishing books and producing plays at a camp in Oregon during World War II. After the war, these members of the Fine Arts Group at Waldport traveled to San Francisco where they heavily influenced the next generation of poets who in turn inspired the cultural upheaval of the 60’s. This social revolution contributed to sparking the creation of the agency that became Pacifica Graduate Institute.

Whether we are journeying through mythic lands of the soul like Odysseus, or sailing on adventures of historic discovery like Magellan, we also encounter treacherous and turbulent waters between cliffs where fires of devastation blaze above and islands of isolation threaten to wreck us. Traveling out of that storm to the tranquil cove of Pacifica can let us feel we have discovered a haven where we may drop anchor, resupply our spiritual goods, nurture and heal our souls, and rest in a protective port. Our ship, however, is not completely safe in the harbor either. Dangers may still swell up from the deep and threaten to capsize our vessel or wash us overboard. We may drift into trouble if our anchor does not hold firm. Our fellow travelers warn us about these dangers as we gain skills of charting and navigation, and continue to develop traits such as steadiness, curiosity, endurance, and patience.

My cohort was just such a group of special supportive fellow sailors. Following the tradition for each cohort to present a gift to Pacifica, the Peace Pole that we offered meant something different to each person, as any symbol carries the meaning that we bring to it. The twelve of us: Brandon Chase, Chris Flaherty, Elise Hart, Michael Hofrath, Laura Jones, Heather Lovig, Sherry Mandan, Barbara Morse, Patricia Patrick, Priscilla Rich, Patricia Selbert, and I, each chose a different language that reflected the honor and acknowledgement we gave to our ancestors and to causes close to our hearts.

I would like to reiterate my thanks to them for their kindness and generosity; and to Dr. Caylin Huttar for her support, encouragement, and exemplary peaceful heart; and to Jeff Abraham, Marshall Chrostowski, and Pat Katsky for their assistance in bringing the Peace Pole to Pacifica.

Another group that I wish to acknowledge is the team of hard-working women who organize and clean the classrooms and sleeping quarters of the Ladera Lane campus. I sat with Arcelia, Elia, Ermelinda, Maria, and Marisela around the stone table in the gazebo and asked them, “¿Que es la diferencia entre la paz y pacifico?” (“What is the difference between the two words for peace?”) They generously responded that la paz carries a connotation of harmony while pacifico denotes a sense of tranquility, “Como aqui,” they said. (“Like here.”)

Other Peace Poles also impart important stories of their raison d’être, five of which I explored in my fieldwork study during Spring and Summer of 2014. At first I was going to interview founders of only local Peace Poles such as the one nearby at La Casa de Maria which was given by life-long peace activist, Jolene DeLisa, to commemorate her beloved late son. Just a little farther away at a place of worship in Northridge, CA, the Peace Pole was arranged with the expert assistance of JoAnn DeSantis, by conscientious objector Dick Flaharty, whose story was also fascinating and inspiring. Additionally, I visited my Alma Mater, Pomona College, which received the gift of a Peace Pole from the U.S. Peace Corps in which I also served. Then the opportunity came to travel farther to Wassaic, New York to visit the beautiful landscape of the World Peace Sanctuary where I chanced upon a heartfelt conversation with the Executive Assistant, Ann Marie Robustelli, revealing the sacrifices we make for peace. From there the journey took me to Washington D.C. where I did not expect to be granted entry to the Pentagon, let alone interview anyone there. Yet, that is what happened. It came as quite a fortuitous surprise to secure an interview with Luffon Berry, a Chaplain’s Office minister. I’ll let the presence of a Peace Pole in the midst of that formidable fortress speak for itself. 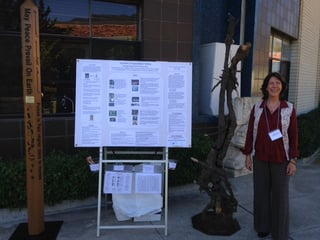 To be able to share this work at the recent conference in honor of Marion Woodman was also gratifying. My appreciation goes to Toni D’Anca and her team, Arron and Natalie, for their excellent organizational abilities, and to others on the Conference Planning Committee for accepting this poster presentation.

At the conference, where the Pacifica Peace Pole was displayed, one woman from the Marion Woodman Foundation board communicated its importance because it is tangible; something we can do. Thus, it carried the message of hope. 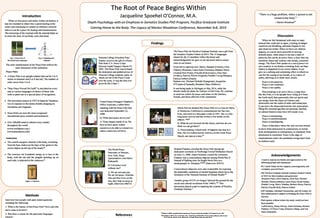 Another lady from Texas was excited to tell me that when she dedicated a Peace Pole in her front yard, friends, neighbors, and people she didn’t even know came to join in the celebration. In this manner, it provided a sense of community.

A Sandplay Therapist commented that one of her clients used a similar article in that person’s sandtray. The meaning that person brought to that article was very close to the meaning of the Peace Pole. This seemed to indicate an archetypal resonance.

Another man stopped and placed his hand up on the pole, lowered his head and gave a sob. He said the memories were coming of a time he was visiting a Buddhist monastery high in the Himalayas where prayer bells were placed so people could ring them. Each one was inscribed with prayers that would emit when it was rung. At first he hesitated to touch them, but then, when he was able to ring them, he could feel his prayers emanating into the world as the sound of the bells resounded aloud. To me, this resembled articulating aloud the words on the Peace Pole “May Peace Prevail On Earth.” Other memories came to him. “I touched the wounds of the soldiers in Viet Nam,” he said while he traced his fingers along each black letter etched in the wooden flesh of the pole as if he were poignantly pointing to the way our scars form the letters of our prayers.

The next time you journey to Pacifica, please visit the Peace Pole. Please touch it. Let it touch you. May you find the meaning it conveys to you. It bears more than one voice can utter. 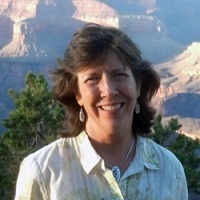 Jacqueline Spoehel O’Connor is currently a student at Pacifica Graduate Institute in the Depth Psychology Program, Somatic Studies Specialization. She served as a Peace Corps Volunteer in the Dominican Republic (‘82-’84). She also worked for 20 years in the Greater Los Angeles area as a Vector Ecologist studying Encephalitis and the West Nile Virus in mosquitoes. In addition, she concurrently practiced massage therapy during which time she became a Reiki Master. You can contact Jacqueline about her work in futher detail at : jacqueline.oconnor@my.pacifica.edu.