In a land where the veil between life and death and between the sacred and mundane is porous and sometimes transparent, Kansas native and local resident Pamela Bjork sought solace as she grieved her father’s passing. That land was the island of Bali where she visited for the first time in 1995. That trip was a seed, growing over the next 20 years, bearing fruit in the form of a degree from Pacifica Graduate Institute and now an exhibition that officially opens with a celebration on Saturday, November 22nd from 2 to 5pm - Mythic Threads: Art, Healing, & Magic in Bali. 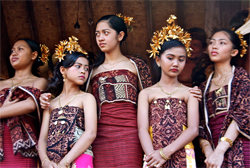 “An unbidden invitation arrived in the mail one summer day shortly after my father’s death in 1995,” Bjork recalled. “It read, ‘The Healers of Bali.’” Soon she was on her way. “The busyness and warmth of the people, visits to strange and exotic healers, multitudes of offerings, vibrant colors of textiles, sacred ceremonies, and performance everywhere offered a new perspective on how to live and helped assuage my grief,” Bjork shared.

Bjork is a 2012 graduate of the Mythological Studies Program at Pacifica. Her fascination with Balinese culture and mythology led her to the topic of her dissertation, Hospitality of Color: Healing Presence in Ceremonial Balinese Textiles. This exhibition follows, illustrating the living myth of a contemporary culture, allowing the viewer to follow in the footsteps of Bjork’s pilgrimage to see living stories in the images and artifacts she brought home. Bjork will talk about her experiences and learning at 2:30pm.

The exhibition at Pacifica’s Ladera Lane campus includes Balinese ceremonial textiles, photographs, dance masks, mythological stories, magical drawings, and a short film depicting the living mythos of Bali. The exhibition is on view daily, 8am to 10pm. (Pacifica is located at 801 Ladera Lane.) “I’ve always loved word (story) and image (art). For me, mythology marries the two,” Bjork shared. “Mythological narratives enable us to give order to the chaos we live in and show us different ways of being in the world, both in inner realms and outer realities.”

Some of the very first Balinese pieces Bjork collected, a series of dance masks are part of the exhibition. She also started taking photographs, trying to see with film what her heart began to understand about these people and the world.

“The Balinese mythos holds the world as one indivisible whole that contains magic, medicine, and mysticism,” she explained. “The divine nature of their world is the focal point. Macrocosm manifests in the microcosm and vice versa. Bali is a world of inter-dependence, inter-relatedness and inter-penetration, in continual flux and interaction. We can learn from that!”

As this understanding developed, of this divine nature of the world and a sense of the balance between inner and outer it also began to appear before Bjork’s eyes. It was present in the very fabric that the Balinese weave and wear. “The fundamental notions of the universe of the Balinese counter the either/or thinking of the West. Enacted in daily life, the underlying contradictions are balanced through performance, ritual, offerings to the gods, acts of beauty, and continual prayer. Tensions in momentary agreement create harmony, albeit transitory and fleeting,” Bjork explained.

According to Bjork, Bali is home to some of the most important and spectacular ceremonial textiles in all of Southeast Asia. The vertical warp threads, long yarns that string the loom, create the structure and represent the eternal. Horizontal weft threads, yarns that interlace, represent the day-to-day. Mythological material, textiles are fibers of society that express the sacred and profane, communicate with and can transform those who come into contact with them through spiritual or magical practices. The Balinese mythos holds the world as one indivisible whole that contains magic, medicine and mysticism. The divine nature of their world is the focal point. Macrocosm manifests in the microcosm and vice versa. Bali is a world of inter-dependence, inter-relatedness and inter-penetration, in continual flux and interaction.

Bjork’s initial experience with the people and culture of Bali were seared onto her heart in a pivotal moment during a tour. “I remember seeing a sarcophagus of paper mache bull being carried by villagers” she related. “Our guide told us the Balinese honor death with elaborate cremation rituals. In mourning for my father, I was deeply touched by their reverence towards the dead, public mourning, and celebration to release the soul of the deceased.” 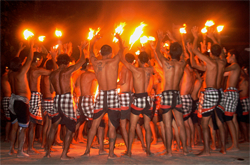 For Bjork, simply being with people that honor the sacred in the daily was profound. “A sense of other-worldliness, mysticism, and supernatural powers reigns; the visiting Gods own village temples,” she related. “Invisible forces and the reality of spirits are honored. Mythological figures, weapons of the gods, flowers and colors of the Gods are woven into the textiles unique to Bali, imbuing a felt-sense of the holy. The fibers themselves are a healing presence.”

This way of living called forth a response that has been 20 years in the making.

“I am captivated and awed by the beauty of the Balinese and their depth of belongingness to the land, to each other, and to their complex, ritually laden cultural traditions,” This essence Bjork has tried to capture with her photography.