Limitless Growth, the Destructive Myth of our Times: PART TWO of a Report on a Talk Given by Dr. Vandana Shiva at Pacifica’s 40th Anniversary Conference

By Bonne Bright. Read Part One of this Report here. 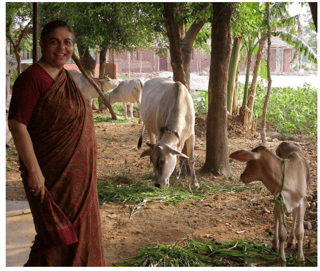 Dr. Vandana Shiva, author and activist, has courageously spent the last decade working on soil solutions to climate change, steadfast in her belief that if governments can’t make the shift, people can.

In her recent talk at Pacifica’s “Climates of Change and a Therapy of Ideas” conference, she focused on the dangers of genetically modified crops and the big business that seeks to capitalize on it. Monopoly rights on seeds and plants are increasingly being imposed through global patents, she notes, by which certain corporations develop proprietary processes for breeding plants and animals, thereby allowing corporations to claim the resulting seeds and animals are their own inventions.

The genetic modification of organisms (GMO) is leading to privatization of what should be common, Shiva insists, presenting great danger to the future of food. The scientists who have the genetic capability to transfer genes from one species to another don’t have the capacity to understand what it means, she noted, offering number of examples of challenges—even tragedies—stemming from the imbalance of power held by large corporations seeking to turn a profit.

Examples run from everything from the mass numbers of plants and animals that are born deformed due to the scientific testing (Dolly the sheep, the first professed “success” of genetic modification or cloning in animals, for instance, was the only one of 273 “Dollys” born that was not deformed) to three hundred thousand farmers in India who have committed suicide[i] since record keeping began in 1995, due to untenable changes to farmers’ livelihoods instigated by big businesses.

In rural areas of India and elsewhere, World Bank is known to give loans for farming, but the loans require that chemicals to be utilized by the farmer in order to get the loan. Up to sixty percent of soil organisms are dead on farms in certain areas, and not a single pollinator can be found, Shiva notes. Other conditions sometimes require farmers to dig deeper wells and to grow certain crops like sugar cane, which requires 20 times more water than traditional crops may have required, depleting water tables in the area.

Sometimes the bank offers to dig these new wells “free of charge” in return for owning rights to the land, ultimately resulting in dispossession and displacement. In some parts of India, 80% of people had to move because of drought. Eighty-four percent of those documented farmer suicides took place in an area where 95% of cotton is controlled by Monsanto, Shiva revealed.

Further, climate data collecting is now a key offering from Monsanto. Aided by computer software/spyware incorporated into tractors and farm equipment that run on high tech (see photo)[ii], John Deere and others collect and consolidate the data collected by farmers on crops, soil, nutrients moisture, et cetera and sell it back to them. For $1,500, for example, farmers can enroll their entire farm into Climate Pro, which provides tools to monitor nitrogen levels for growing corn.[iii]

In other words, telling farmers how much carbon they have in their fields is now being privatized, forced, paid for as a commodity, Shiva points out. 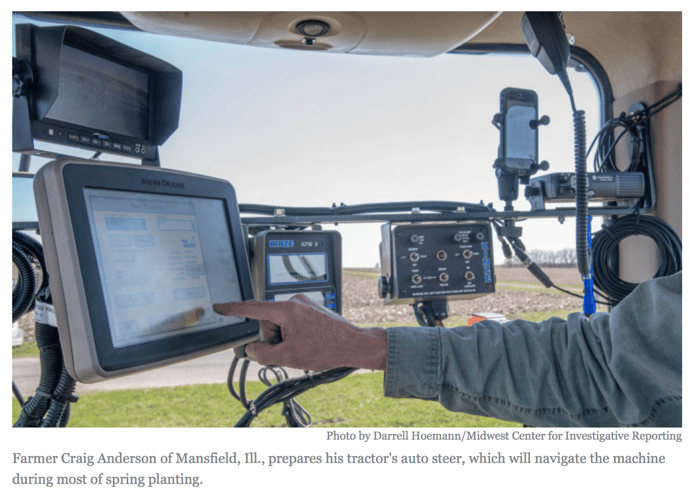 Even terrorism is linked to the rise of large corporations that are peddling agricultural practices and products that capitalize on the imbalance of power, the displacement and dispossession of people from their lands, and climate change. ISIS (which is still the goddess of the earth in Egypt to her, Shiva notes) was spawned in part due to agriculture and changes to land and livelihood in Syria. In Syria, as in India, farmers were coerced into growing new “green” wheat which need huge amounts of irrigation, nearly ten times more water. This condition, in conjunction with climate change and drought, resulted in a million people being displaced and moving into cities where their difficulties were often compounded, creating disillusionment and despair.

Too, in Nigeria where Boko Haram has proliferated, Lake Chad used to be 22,000 kilometers and supported 9 million people, but the “green revolution” diverted water for dams for irrigation of commercial crops. Ultimately, 80% of the water was diverted. When farmers and herders no longer had access to water, clashes broke out. There is a general tendency in the modern world to label recent developments as terrorism without looking more deeply at the issues the led to it, and without asking whether the growth of terrorist organizations could have been prevented.

In 1987, Vandana Shiva decided she would spend the rest of her life defending seeds. “We have duty to pass them on in richness, health, diversity, integrity into the future,” she insists. Shiva started the organization Navdanya, meaning “nine seeds,” a women centered movement for the protection of biological and cultural diversity—a network of seed keepers and organic producers that keep seed banks Conserving seed is conserving biodiversity, she firmly believes.

Life is not invented, Shiva insists. You can’t fix the price of seed because it’s not an invention! Millennia of evolution have collaborated to create a seed. Think of all the pollinators, the sun, and the rain that contributed over millions of years. We collectively need an intelligent response to climate change because it increases resilience. On the organic farm Shiva maintains, pollinators have increased six-fold. Their water level has come up 60 feet from 120 feet to 60. Over time in her village in India, people starved during adversity, but every seed bin was full to ensure their future.

Young people the world over are being treated with drugs for issues that emerge, at the core, from us being in wrong relationship with land, food, and the natural world, Shiva believes. Organic soils are a plant, water and oil solution. Social issues like overpopulation, literacy, and healthcare, would all be drastically different if people were able to stay at home and live on the land sustainably.

For four decades of dedication to independent and ecological research, Dr. Shiva has been honored with many awards including The Right Livelihood Award, The Sydney Peace Prize, The Fukuoka Prize and the Lennon-Ono Peace Prize. She is also the author of numerous books and the founder of Navdanya, the movement for seed saving and ecological agriculture. She seems, to me at least, uniquely positioned to speak on behalf of the earth, the soil, and the seeds that desperately need our tending.

What is it we will do now, Shiva demands. You don’t have to be violent to act, you don’t have to hate people to act, Shiva proclaims. What is our commitment to heal the earth and our planet? A lot of people hesitate and think that resistance is a negative act, but creative nonviolent resistance is not just a positive act it's a necessary act.

We need a massive de-addiction to the money-making machine: economy as money-making has lost its way, Shiva ultimately affirms. Cosmic harmony is one continuum from the planet’s well-being to ours, and justice is the ultimate stabilizer.

Read Part One of the report on Vandana Shiva’s conference talk here. 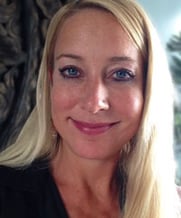 Bonnie Bright, Ph.D., graduated from Pacifica’s Depth Psychology program after defending her dissertation in December 2014. She is the founder of Depth Psychology Alliance, a free online community for everyone interested in depth psychologies, and of DepthList.com, a free-to-search database of Jungian and depth psychology-oriented practitioners. She is also the creator and executive editor of Depth Insights, a semi-annual scholarly journal, and regularly produces audio and video interviews on depth psychological topics. Bonnie has completed 2-year certifications in Archetypal Pattern Analysis via the Assisi Institute; in Technologies of the Sacred with West African elder Malidoma Somé, and has completed extensive studies in Holotropic Breathwork™ and the Enneagram.