Fire on the Mountain at Solstice

With news of the Thomas fire nearing and passing Pacifica's campuses, we turned towards the media to bring us images of what was happening. Firefighters silhouetted small against the walls of flame, showing us the immensity of nature's power, surpassing a human's strength to control it. Maps of dots, squares, or illustrated flames depicting the advancing fire gave us imaginings of a vast creature consuming the overabundant growth of match-stick dry vegetation.

“Fire on the Mountain.” The 56th hexagram of the I Ching with the name “Traveler,” or “Wanderer” presents us with the image of fires burning swiftly across mountains, with their flames blown from place to place, fast moving with impetus to make people travel quickly from its path, creating wanderers as it wanders. "When one is traveling, life is not stable, and everyone is a stranger. Moving from place to place makes one physically and emotionally tired." (Huang, 1998, p. 441) We can see how the outside fire on the mountain named “Traveler” reflects the inside state of the “Wanderer.”

Another translator of the I Ching, Pearson (2011), notes that in ancient China, fire was not seen as a destroyer in the long-term, but one that does involve loss. “In the same way, in being wanderers (or pilgrims) we must leave behind many ties and almost all physical possessions. But by acceding to this emptiness and vulnerability, we open ourselves to new worlds, some of which may be far more fruitful for us than our current homes” (p. 212). 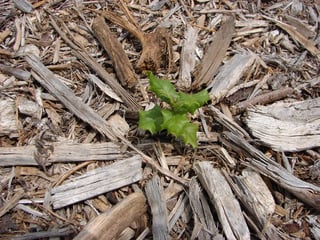 Losing so much may leave us feeling as devastated as the blackened hills after the fire trailed ash in its wake. Yet with wisdom we realize that the ash gives nourishment to seeds that fires crack open for the first time in decades and we will come to see verdant fields of sprouts we may have never known before in our lifetimes.

If we attend to our inner lives as well, we will see this cycle of nature reflected there: An overabundance of thorny thickets, cleared by a destructive flare up, followed by the lull of devastation. This is not the end though.

Winter Solstice is the longest night of the year following the new moon’s darkest night. We retreat to gather our vital energies, like the newly cracked seeds send their roots down into the dark earth to gather nutrients to nourish their vitality, their essential nature, before unfurling tendrils struggling upwards through the concealing soil.

Even though unseen, the deeper parts of ourselves are gaining nourishment in these dark times, making ready in recumbent and hidden places a stronger force to emerge when this season of obscurity passes—towards the coming time of re-enlightenment.

Jacqueline Spoehel O’Connor is a seasoned biologist of 20 years, with ten years as a budding student of depth psychology. She is currently working on her dissertation in depth psychology on Returning Towards the Undifferentiated Form: Restoration in Cell, Psyche, and Land.