An interview by Angela Borda of Mary A. Wood & Susan Rowland, Pt. III of III 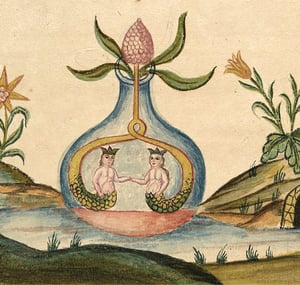 Pacifica’s Engaged Humanities and the Creative Life program is led by the dynamic team of Susan Rowland, Ph.D., Jungian scholar, and Mary. A. Wood, Ph.D., a visual arts, writer, and artist mentor, who focuses on Jungian and archetypal approaches to creativity.

"Trickster figures from world mythology, such as the Greek Hermes and Native American Coyote, allow us to speak imaginally of the archetypal forces that shape a creative life. These figures are world-bridgers and rule-breakers; they’re psychopomps or guides of souls who can move between the mundane and the sacred, between what is manifest and what is hidden." -Mary A. Wood

How do Pacifica graduates grow professionally after completing their M.A. in the Engaged Humanities program?

Mary A. Wood: There are a few primary directions that I’ve seen our students follow: The first is toward the entrepreneurial life. There are people who come to the program without necessarily knowing what they want to do after graduation. What they do know is that they’re going to draw their own map. If they’re not attracted to an existing field, then they’re going to create one. This type of drive has taken shape in the creation of non-profits, art spaces, retreat centers, workshops and more, where the graduates  take everything they’ve learned here and present it to the public in their own unique way. Secondly, we attract a lot of teachers; people who love teaching but find that it’s fallen flat as they’ve spent years nurturing creativity in others, and have neglected their own creative lives—I think that many of us can relate to this. After the program, they return with renewed devotion to their field and with new tools and perspectives based upon their intensive study of depth psychology, the humanities, and creative practice. The real world consequence is that many people get raises upon completion of their Master’s degree in Engaged Humanities—especially the teachers and lecturers. The credential is both personally transformative and valued in monetary terms within their institutions. Susan: Teachers who get MA’s usually get raises, that’s how it works. We have people who are not yet teachers but are interested in teaching and take this degree into working at a community college, because an ma will qualify that or in art institutes.

A third group of individuals who complete our program are recognized creative professionals who yearn to understand their creative calling at a very deep level—in the manner that only depth psychology can afford. They may also be ready to try something totally different, beyond the art form that they’re known for. For example, a beloved and well-known illustrator has just completed her first one-woman play as part of her work on the program. These nationally and internationally recognized creators become wonderful mentors to the emerging creators within their cohort. Of course, these aren’t the only three avenues that graduates take, but they are fairly consistent paths.

How would you describe the interaction, growth, and spirit of the MA cohort?

Susan Rowland: By putting cohorts together in some courses, we enable them to mentor each other and to collaborate. We do not force any of this. Rather, we give the opportunities and watch students making their own creative and pedagogic relationships.

What do you most value about teaching at Pacifica, about the campus, the colleagues, etc.?

Mary A. Wood: There are so many things to value, but Pacifica’s soulfulness and longevity are evident in the people who carry out the school’s mission every day; this begins with the people who drive the shuttles, prepare the meals and tend to the guestrooms and magnificent grounds. In addition, the faculty at Pacifica carries forward a legacy of essential ideas rooted in awareness, humility, creativity and service. I’m honored to be teaching alongside several of my personal mentors.

How do you present and work with the idea of the artist as someone channeling something greater or beyond or other?

Susan Rowland: Jung saw that some art is not about the artist as an individual but rather what the collective psyche needed to express at any one time. This program explores this possibility actively and dynamically. We see art picking up notions that are not yet known by the artist or themes foreign to the arts but which speak to others in the cohort or to major issues of general concern. We see dreams spontaneously appear in the pain of another or in stories in ways the writer did not consciously know. We see ideas that are not yet conscious in the world be improvised with the artist’s intuition.

Is the artist an archetype? And if so, what are his/her primary characteristics and how does understanding that help the artist?

Mary A. Wood: The human artist or creator is not an archetype, as archetypes are potentialities; archetypes are the shaping energies of what Jung called the collective unconscious. That said, sincere artists and creators live archetypal lives in that they’re guided, even driven, by these energies. Trickster figures from world mythology, such as the Greek Hermes and Native American Coyote, allow us to speak imaginally of the archetypal forces that shape a creative life. These figures are world-bridgers and rule-breakers; they’re psychopomps or guides of souls who can move between the mundane and the sacred, between what is manifest and what is hidden. Like our contemporary creators, they return from their oftentimes-difficult visionary journeys bearing gifts of insight that can move and transform us. Creative practice is a ritual and the historic lineage of the artist reaches back millennia to the shaman, healer, seer, priestess, and poet. Today’s creative individuals are modern-day therapeutes in that they both reveal and heal the world around them through their creative expression. They are essential to our survival as an interconnected web of life on Earth.

Susan Rowland: I agree with Mary. The artist is someone who can have a dialogue with archetypes as the seeds of creativity in the unconscious. At times, and in some art, the artist becomes a prophet for the culture or expresses what has been too repressed.