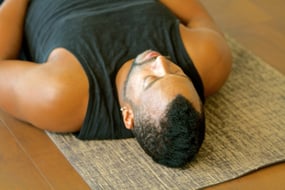 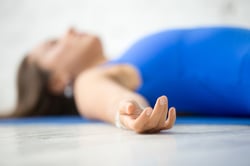 Almost imperceptibly at first, the group begins to move. Silently, a leg lengthens along the floor. A shoulder settles in its socket. With eyes closed and faces reflecting a quiet inner focus, the women and men perform a series of movements. Every person's movement is different, but each reflects a quality of weight, directed intent, and a clear relationship with gravity. They move as if embracing the Earth, reestablishing a connection they had somehow lost.

Then music fills the room, and the group begins to dance. The movers dance from their bones and their guts, shaping themselves into sticks and stones and bowls of Jell-O. With arms reaching and feet thumping, they create expressions of their unique and common anatomy. They follow the music's thundering rhythm and echo it, using the curves and hollows of their bodies as percussion instruments. Tracing a spiral on the ground with their steps, the movers connect hands and follow a line of linked bodies that curls and uncurls as each member of the group passes next to every other.

When the music ends, the group sits in a circle on the floor to share with each other what the moving was like. One woman shows a drawing of her feet she drew during a break. She talks about how she used to think her feet were ugly, but likes them better now she can see and feel how strong and articulate they are. A man describes how hard it was just to allow himself to lie on the floor, as if he couldn't quite trust the ground to hold him if he really let go. More than a few people are breathing from deeper in their bellies, and seem more solid than when they arrived. Before everyone gets ready to head home for the evening, they are encouraged to recognize traces of tonight's experience imbedded in their day-to-day experience.

The members of the group came to this session from very different places, literally and figuratively. Some have come from the competitive environment of the business world, and use the session to help them unravel the stress of the day. Others work in the helping professions – education, social work, or healthcare – and come here to refocus on their own personal needs and experiences, as a form of professional self-care. Still others are students of yoga, dance, or massage. Many are in the later stages of healing from various types of injury (either physical, emotional, or both) and use the sessions as part of an overall program of recovery. Despite their diversity in terms of age, culture, ability, profession, and personal experience, all share a desire to become more aware of their bodily experience, and to share that experience in a collective setting.

When the group meets again next week, the dance will be much different; lighter, more fluid, less direct. In the following month, they will move from five unique and distinct body/mind states, each of them inspired by a different Element - Earth, Water, Air, Fire, and Ether. Using the Elements as a framework for their explorations, they will discover new movement pathways to being grounded, flexible, inspired, passionate, and transformed. They are engaged in a process of physical, psychological, and spiritual exploration called Somatic Alchemy™, and are learning one of the methods of that process: Elemental Movement™.

What is Somatic Alchemy™?

Somatic Alchemy™ is a process based on the integration of two different fields of study – somatics and alchemy. Somatics is a term coined by Thomas Hanna to refer to a group of bodywork disciplines sharing a common perspective that privileges the internal subjective experience of the body. In the West, early pioneers of these disciplines shared a concern for the discrepancy they found between the "aliveness" of felt bodily experience and the relative "deadness" of conventional approaches to exercise, dance, and physical manipulation. As they began to question commonly accepted notions of the body and healing, they developed approaches that included and honored what was, for them, the missing dimension of embodiment - the full experience of the self as a living body. These new ways of working with the body, begun around the turn of this century in Europe and America, included the Sensory Awareness work of Elsa Gindler and Charlotte Selver, the German Gymnastik of Mensensdieck and Kallmeyer, and the Alexander Technique of Frederick Matthias Alexander. In mid-century America, influences from Eastern holistic practices furthered the evolution of somatics, and the scope of somatic practice was broadened to include Tai Chi, Aikido, and Yoga. Today, many other schools are also widely considered somatic in orientation, such as Feldenkrais Method®, Continuum, Rubenfeld Synergy®, Trager®, and Body-Mind Centering®.

Alchemy (the second dimension of Somatic Alchemy™) is the ancient art and science that seeks to understand the essential principles that underlie the form and function of the cosmos, and its symbols are deeply imbedded in the philosophical and religious traditions of many cultures. Alchemy is a multifaceted subject, and can be understood as a proto-chemistry, offering unique approaches to the preparation of medicinal remedies, as a source of psychological symbolism, in which the archetypal structure of human thought and feeling is illuminated, as an allegorical exploration of the journey of the human soul, and as a newly recognized influence on the world view of important writers, philosophers, and artists throughout history. In this context, alchemy also refers more generally to the process of changing something ordinary into something special. The rationale underpinning this alchemical process dissolves traditional conceptual divisions between the contemplative and practical, as the practice of alchemy works with the physical as spiritual, and vice versa. In current terms, this process is both therapeutic and educational in nature, and involves an awareness and integration of the multiform aspects and properties of reality/experience. Thus, Somatic Alchemy™ is a process of transforming the soma, or the body as experienced from within. It is the theory and methodology in which the actual practice of Elemental Movement™ is grounded. 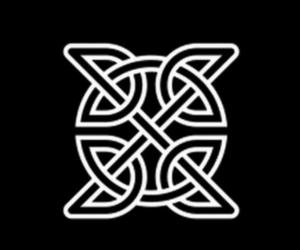 What is Elemental Movement™?

Elemental Movement™ is movement-centered practice based on the five Elements – Earth, Water, Air, Fire, and Ether – which are primary symbols in most alchemical traditions. Using the Elements as a framework and as a set of symbolic tools, Elemental Movement™ employs movement as the primary vehicle for a wide range of personal explorations. On a physical level, the Elements provide a map for exploring different body systems and movement qualities. They are also used as instruments in the development of a high resolution body image and an expanded movement repertoire. On a psychological level, the Elements represent different aspects of the self that can be accessed and expressed through movement. Working with the Elements as archetypes (or primal symbolic patterns of human experience), Elemental Movement™ echoes the psychological process of individuation through active imagination, expressed as movement. The improvisational movement structures also provide an outlet for creative and emotional expression. On a spiritual level, Elemental Movement™ serves as a form of moving meditation, drawing on the capacity of certain types of movement to transform ordinary states of consciousness into transcendent experience. Because the Elements have been sacred icons in many religious and spiritual systems, the exploration of them through movement can also serve a contemplative function.

The rationale that underlies the practice of Elemental Movement™ is both simple and multifaceted. The basic premise is somatic in its perspective, and proposes that human functioning and experience is enriched through enhanced self-awareness. In turn, increased awareness promotes freedom of behavior through an increase in the range of choices available to us in response to inner needs and the demands of our environment. Therefore, the fundamental objective of Somatic Alchemy™ as expressed through Elemental Movement™ is an increased ability to use oneself fully – to respond effectively, fluidly, and with pleasure to the challenges of being alive.

Dr. Rae Johnson will be leading the upcoming workshop Elemental Movement™ at Pacifica's The Retreat May 14-16th at the Lambert Road Campus. For more information and to register visit retreat.pacifica.edu.

Rae Johnson, Ph.D., RSW, RSMT, is the chair of the Somatic Studies specialization in the Depth Psychology program at Pacifica Graduate Institute. She is the developer of Elemental Movement™ and the author of a book by the same name. Working at the intersection of somatic studies and social justice, her scholarship focuses on the embodied experience of oppression, somatic approaches to research, and arts-based cross-cultural somatic literacy.

Upcoming workshops at The Retreat